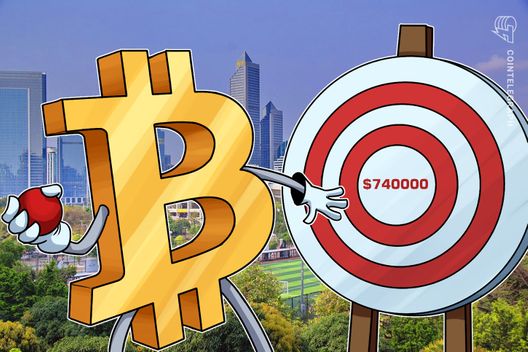 A founder of Chinese mining pool Poolin predicted that the price of Bitcoin could reach nearly $740,000.

While Zhu noted that “it now feels more like a bear market,” he reportedly predicted that in the next bull run, prices will be 10–20 times higher than previous ones. Zhu also noted that massive prices spikes like the one that resulted in the $20,000 per BTC high in 2017, will not always exist, adding that the next bull run could be the last.

Predictions from experts in various aspects of the crypto space have ranged from bullish to extremely bearish. During a blockchain event in April 2018, investment tycoon Tim Draper forecasted that by 2022 the price of Bitcoin could reach $250,000.

Earlier this week, Barry Silbert, CEO and founder of Digital Currency Group and Grayscale Investments, said that the value of most digital tokens “will go to zero.” He added that, “Almost every [initial coin offering] ICO was just an attempt to raise money but there was no use for the underlying token.”

Zhu’s mining pool, Poolin, has 10.45 percent of global network share, according to BTC.com. The current bear market has hit cryptocurrency miners hard. Some mining companies in China have started selling off hardware by the kilogram.

Earlier today, United Kingdom-based cryptocurrency miner Argo Blockchain announced it was refocusing its business in order to cut costs. Argo is terminating its Mining-as-a-Service (MaaS) operations by April, which purportedly could cut costs by as much as 35 percent.