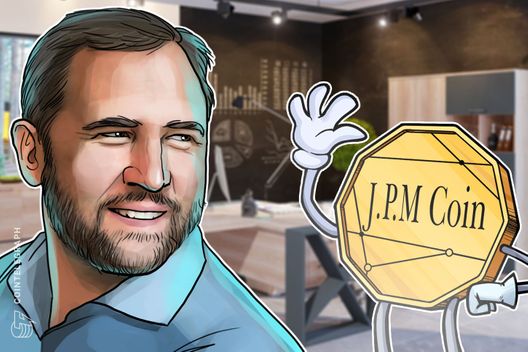 Following JPMorgan Chase’s announcement of the upcoming release of their own digital asset, Garlinghouse criticized the move on Twitter.

“As predicted, banks are changing their tune on crypto. But this JPM project misses the point — introducing a closed network today is like launching AOL after Netscape’s IPO. 2 years later, and bank coins still aren’t the answer.”

The CEO linked his comments to an earlier article he penned two years ago, critiquing the prospects of proprietary bank-issued digital coins — which he dubs bank coins. In his earlier piece, Garlinghouse had argued that such projects are misguided, and would inevitably culminate in “an even more fragmented currency landscape than what we have today”:

Notably, as reported, JPMorgan has outlined that JMP Coin will be initially be focused on facilitating international settlements by major corporations, helping speed up transactions that currently take a day or longer using existing options such as SWIFT — a similar prospective area of application to that of Ripple.

Indeed, Garlinghouse just recently underscored Ripple’s own professed ambitions to supplant SWIFT’s global interbank network, commenting that “what we are doing on a day-to-day basis is in fact taking over SWIFT.”

A Bloomberg article has today cited multiple industry figures who argued that JMP Coin risks a becoming a direct threat by encroaching upon Ripple’s turf — the cross-border payments and remittance market for banks and enterprises.

One industry expert noted that “JPM’s project is much more evolutionary than revolutionary — it is utilizing a private, permissioned blockchain technology called Quorum, which is much closer to a Google Sheet than a Bitcoin. The project is clearly competing directly with Ripple Labs and their centralized cryptocurrency XRP.”

Lastly, unlike Ripple, JPMorgan Chase has designed its asset as a stablecoin by means of a U.S. dollar peg — which a different commentator argued could heighten its attractivity for financial institutions, who may shun a volatile unit of exchange for settlement and payments.

As Garlinghouse also noted, the JPMorgan Chase move represents something of a volte-face: the bank’s CEO Jamie Dimon is notorious for having openly condemned Bitcoin as a “fraud.” Dimon later diluted his antagonism in private comments to Cointelegraph at the World Economic Forum last year.