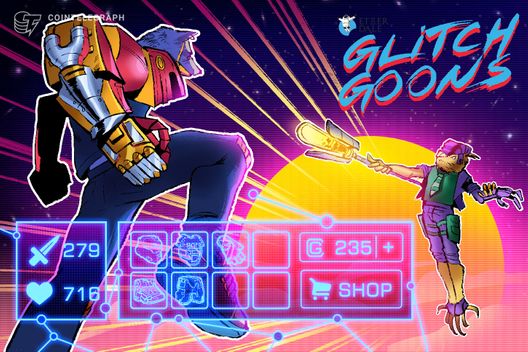 A mobile fighting game is ready to integrate a new system that allows users to create and manage non-fungible tokens through the browser and have them synchronized on different blockchains.

Estonian game developer Ether Dale is ready to implement its new system — dubbed “Side-chain 2.0” — to its multi-blockchain mobile game Glitch Goons. The company says its aim is to build a platform on which people who are not familiar with blockchain can easily create, trade and exchange non-fungible tokens (NFTs).

Glitch Goons is a player-versus-player (PvP) automatic game where cybernetic animal-humanoids battle with each other to get resources and power in a futuristic, post-apocalyptic world. Now, the developer is planning to implement its own Side-chain 2.0 with new features. The new system will allow for generating free, scalable, and user-oriented decentralized applications (DApps) and games that can be used by people who are not familiar with the blockchain world.

The users will be able to create their own non-fungible tokens on their accounts or on the game’s server through the API. That means it will be possible to access characters from a browser without installing a wallet. The system will standardize NFT and synchronize them on different blockchains so the in-game items will be easily transferred from one blockchain to another. The process of putting non-fungible tokens on any blockchain available within the ecosystem will be automatic.

The company says Side-chain 2.0 will prevent major time setbacks for developers as well as financial losses involved in creating the same token for different protocols. “We strive to build a platform to create, trade and exchange NFTs easily, which is beneficial for both players and devs,” Sergey Labutin, CEO of Ether Dale, says.

The integration of Side-chain 2.0 to Glitch Goons will also expand the payment methods available within the game. The players will be able to use cryptocurrency and fiat (in Google Play or with credit cards) for their transactions. The system will also enable non-fungible token trading and an account together with the profile data storage.

Moreover, Side-chain 2.0 will offer some technical advantages, such as low-cost maintenance (the players will pay only for the power used in the cloud) and “infinite scalability.” The developer hopes that the new system will make transactions not only easier, but also faster. According to the company, Side-chain 2.0 will enable 15,000 transactions per second (TPS). For example, only 15 TPS can be done within Ethereum and only 7 TPS within Bitcoin. Ether Dale says Side-chain 2.0 is not limited by one particular blockchain: It can connect different blockchain transactions. Using them doesn’t require separate online wallets — one smartphone is enough to manage all payments. Glitch Goons also has its own hard currency: GC is an ERC-20-based token issued by the game developer.

The developer emphasizes that Glitch Goons is one of the first multi-blockchain mobile games. “The goal is to bring the mobile community and the blockchain gaming community together by creating a game that can be played without being on any blockchain, while at the same time having items and characters that can be tokenized on it,” the company says.

Using advanced character management system, players can modify and upgrade their fighters with special stats and abilities so they can perform better in the field. However, the players don’t control their characters during the fight. The aim of the game is to equip the characters with the best abilities available and make them pass through the leagues. At the same time, the animal-humanoids get scaled up to better levels and get rewards, i.e., bonus loot boxes. Players can send their characters to take part in online tournaments and win real prizes.

Ether Dale gained attention after its first attempt to introduce blockchain technology as a financial tool. In 2017, the company released its first product, the blockchain fantasy RPG game Ether Quest. The ownership of the unique characters was guaranteed by smart contract technology, which allowed users to sell, trade or collect non-fungible tokens.