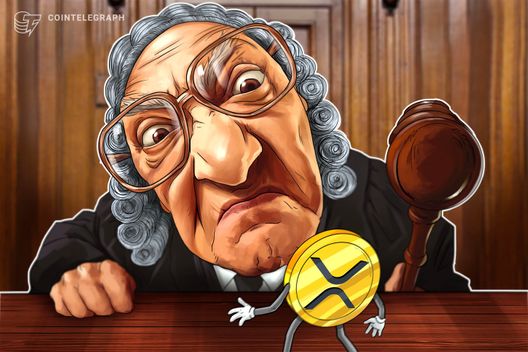 U.S. District Judge Phyllis Hamilton has ordered that the ongoing securities lawsuit against Ripple will stay in federal court.

An ongoing securities lawsuit against payment startup Ripple will stay in federal court, per a recent ruling. The news was announced by lawyer Jake Chervinsky in a tweet on Mar. 1.

“The Court has denied the plaintiffs’ motions to remand. This means the case stays in federal court, a minor but meaningful victory for Ripple,” Chervinsky wrote in the post.

The ruling reads that United States District Judge Phyllis J. Hamilton, of the Northern District of California, has ordered that the class action suit against Ripple Labs, its subsidiary XRP II, and Ripple CEO Brad Garlinghouse, for the sale of unregistered securities must stay in federal court.

Per the ruling, the parties have been given 14 days to conduct a meeting and determine how the litigation should proceed. On the expiry of 30 days of the order, the plaintiffs shall reportedly file an amendment consolidated compliant — i.e. a revision of the original complaint.

Lawyers representing Ripple in the lawsuit filed an application to move the case to federal level in November of last year. That would purportedly allow Ripple to prove definitively that its XRP token is not a security under U.S. law, should it win.

The class action lawsuit against Ripple was initially filed by law firm Taylor-Copeland in May of last year, stating that the plaintiff, Ryan Coffey, purchased 650 XRP on Jan. 5 and sold it on Jan. 18 of last year for USDT. He then exchanged it for U.S. dollars, purportedly sustaining a loss of around 32 percent, or $551.89.

The class action suits alleges that the defendants violated both the Securities Act and the California Corporations Code. The plaintiffs on whose behalf Coffey filed the claim are asking for payment for attorney’s fees, the costs of the suit, and punitive damages, as well as declaring the sale of XRP an unregistered securities sale.