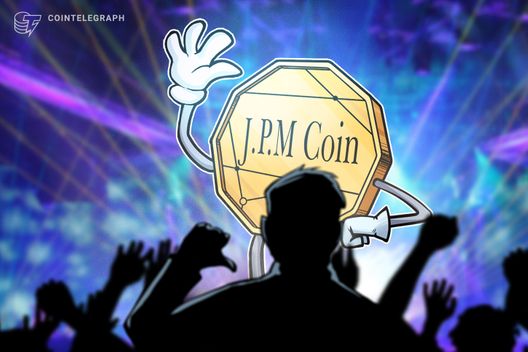 Ripple (XRP) CEO Brad Garlinghouse says the recently-announced digital asset from United States banking giant JPMorgan Chase lacks the interoperability that would make it a significant innovation. Garlinghouse made his remarks during an interview at the 4th Annual DC Blockchain Summit in Washington D.C. on March 6.

As Cointelegraph has reported, JPMorgan Chase announced the forthcoming launch of its new blockchain settlement offering in mid-February: a stablecoin dubbed JPM Coin, to be backed 1:1 by the bank’s USD reserves.

Alluding to multiple industry commentators’ suggestions that the bank’s coin could be a direct competitor to Ripple’s XRP, Garlinghouse dismissed the coin’s usefulness due to the fact that it remains a proprietary in-house asset, and that its exclusivity is likely to lead each major bank to issuing its own coin. This, according to him, will lead to the exact same fragmentation that characterizes the financial services industry today:

“This guy from Morgan Stanley was interviewing me last week, and I asked him, so is Morgan Stanley going to use the JPM Coin? Probably not. Will Citi use it? […] Will PNC? And the answer is no. So we’re going to have all these different coins, and we’re back to where we are: there’s a lack of interoperability.”

“Let’s think about this. [JPM] announced the JPM Coin for institutional customers. If you give them a dollar as deposit, they’ll give you a JPM Coin, that you then can move in the JPM ledger. Wait a minute, just use the dollar! I really don’t understand […] what problem that solves.”

Throughout the interview, the sole thing that Garlinghouse conceded to JPM Coin was the potentially positive effect “for the blockchain and crypto industry to have players such as JPM leaning in.” “That’s the one good thing I’ll say about this,” he joked.

As previously reported, the research arm of top crypto exchange Binance has similarly judged that as a proprietary and centralized network, JPM Coin is unlikely to be tapped by competitors in the banking sector, who may well choose to release their own native digital tokens in future.

In terms of inter-bank settlement, Binance Research further argued that as a closed network solution, JPM Coin is for now unlikely to directly compete with XRP — given the latter’s ambition to serve as a multi-bank “mediator currency between both fiat/crypto currencies and any fiduciary product.”

Binance nonetheless stated that internally, JPM Coin could have a significant material impact in improving the cost and time efficiency of traditional financial services.

Garlinghouse has previously stated that JPM Coin “misses the point” of crypto, arguing that introducing a closed network today is like launching AOL after Netscape’s IPO.