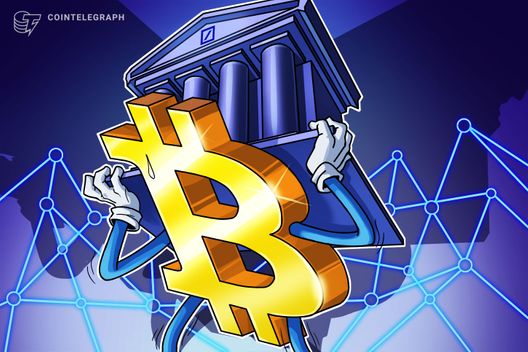 The potential interest rate cut by the United States central bank is apparently one of the reasons for the recent surge of bitcoin (BTC), Deutsche Bank exec Jim Reid said in an interview with CNBC on June 26.

“if central banks are gonna be this aggressive, then alternative currencies do start to become a bit more attractive.”

Reid referenced a recent speech by Fed’s chairman Jerome Powell, who said yesterday that the central bank is considering a cut of interest rates amidst the current economic uncertainty and inflation risks. As such, the U.S. dollar (USD) dropped versus major fiat currencies yesterday, recording a three-month low against euro (EUR), which was allegedly triggered by expectations of multiple interest rates decreases by the Fed.

Meanwhile, bitcoin has continued to hit new 2019 records of above $12,000, while its market cap surged above $220 billion with a dominance rate reached more than 60% for the first time since April 2017, as reported earlier today.

Reid also noted that the recent spike of crypto prices is partly caused by Facebook’s upcoming crypto project Libra, which white paper was released earlier on June 18. Since then, bitcoin has risen more than 30% from around $9,000 to $12,616 at press time, according to data from Coin360.

In the interview, Reid has reiterated his negative stance towards easing practices by central banks after previously claiming that the existing fiat-based currency system was unstable and nearing its end. Providing his remarks back in November 2017, in the wake of the bitcoin’s all-time high record of $20,000 in December 2017, Reid criticized continuous printing of money by banks, warning that this could lead to the end of paper money.

“Add in the May 2020 Bitcoin halving and you have the perfect storm,” tweeted Morgan Creek founder, Anthony Pompliano,” earlier this month.

Ironically, Deutsche Bank itself could be partially blamed for a weakening economy. The bank’s stock has been dropping to record lows over the past year.