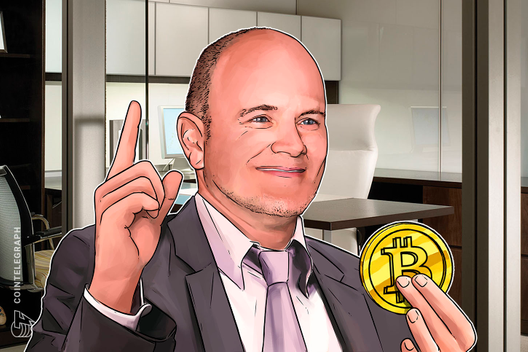 With BTC price circling the $11,000 at press time, Novogratz told Bloomberg TV on July 3 that the coin’s spike toward $14,000 and later downwards correction was to be expected as part of its historic moves. He predicts that the market will see consolidation around the $10,000- 14,000 mark for some time before current momentum enters its next leg and we go higher.

The crypto merchant bank pioneer said the cryptocurrency’s parabolic price moves have been driven by real reasons — pointing to Facebook’s entry into the space with Libra and the fact that payments giants such as Visa and Mastercard have joined the Libra consortium. He added:

“The biggest companies in the world — we also had the investments by the Yale, Harvard and Stanford endowments. All of a sudden the question around institutionalisation has been answered.”

In the longer term, Novogratz argued that bitcoin is carving out its niche as a form of digital gold, and that we can expect it to hit a $40,000 valuation and potentially much higher over time.

Given physical gold’s current market cap of $8.5 trillion, bitcoin still has some way to go before it catches up, he conceded — yet emphasized that the coin has become legitimized as a real, hard asset with a fixed supply and robust technology.

Novogratz contrasted bitcoin with other coins such as ether (ETH) and XRP, suggesting that these latter cryptocurrencies are dealing with significantly more competition.

The fact that altcoins have seen a lesser price hike in the current bull market is, therefore, a sign that the market has become more rational, he said.

Such projects still need time to build the technology that will realize their aspirations — in Ethereum’s case, to succeed in becoming “a web 3.0 decentralized supercomputer” that is scalable and efficient enough for mass adoption. He thus forecast that we are two to three years away from seeing real growth in the altcoin sphere.

In a short remark on the current state of crypto regulation, Novogratz emphasized that the United States is failing to keep pace with the sector, but that Facebook, Visa and Mastercard’s entries will likely serve as a wake-up call that smarter — if not necessarily more — regulation is needed.

As reported, Novogratz’s fresh comments are consistent with his recent analysis that BTC is likely to remain in a consolidation around $10-14,000, notwithstanding its day-by-day volatility.