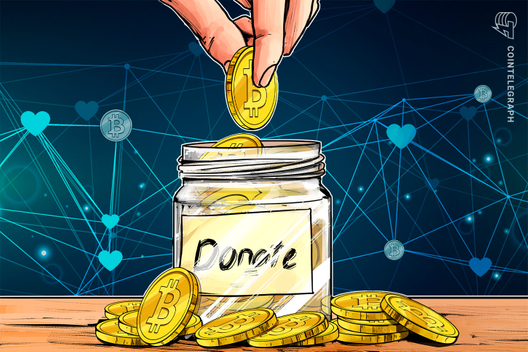 Political commentators have seized the moment to probe the crypto political campaign donation trend in the United States.

As one of only two crypto-accepting Democratic primary hopefuls withdraws his candidacy, political commentators have seized the moment to probe the crypto campaign donation trend.

A report published by business media site Fast Company on July 10 has weighed in on presidential hopeful Eric Swalwell’s withdrawal with a focus on his role as one of two U.S. Democratic trailblazers to have opened his campaign to crypto donations.

As distinct from fiat currency, Bitcoin (BTC) has been classified by the Federal Electoral Commission (FEC) as in-kind when it comes to donation disclosures — just as a pizza delivery to a campaign office would be.

In a wry provocation, Daniel Weiner — a senior counsel at the Brennan Center for Justice, with prior experience at the FEC — dismissed the viability of crypto-denominated funds, telling reporters:

“It’s the same way no major presidential campaigns accept donations of live chickens. Because that’s not very practical for them.”

Barbs aside, he further underscored that cryptocurrencies continue to pose the thorny issue of anonymity for electoral watchdogs such as the FEC.

Adav Noti — a lawyer who reportedly oversaw the FEC’s Policy Division while the commission ruled on how to address BTC donations back in 2014 — echoed Weiner’s perspective, claiming that while the blockchain itself may be immutable and support the tracing of a given coin:

“With a credit card or debit card, you can almost always get to the human being one way or another. With cryptocurrency, you may quickly get to a true dead end.”

Given strict campaign donation disclosure requirements and other restrictions — such as the 2020 $2,800 cap and jurisdictional exclusions — a certain complexity seemingly remains when it comes to squaring election financing transparency with crypto.

Elizabeth White — CEO of blockchain firm The White Company, which had provided its technology to Salwell’s now-defunct campaign — acknowledged that bad actors will always attempt to circumvent rules, with reporters pointing to VPN use and aliases as a potential issue.

Volatility may also contribute to the purported hassle of accepting crypto — with the chance that a coin could soar in value above the stipulated contribution limit even within the 15 minutes a payments processor takes to verify the donation, thereby becoming invalidated.

Onlookers such as Weiner have thus reduced the move to accept crypto by a host of candidates across the political spectrum as little more than a marketing ploy.

Yet Salwell’s crypto-accepting peer and still-running primary hopeful Andrew Yang has forged a reputation that is consistent with his embrace of bitcoin — his history of pro-technology House initiatives earning him the moniker of “The Snapchat King of Congress” in 2016.

And while major 2020 contender and senator Elizabeth Warren remains a staunch crypto critic, libertarians such as Adam Kokesh and John McAfee have solid ideological grounds for promoting the technology. Even if the latter, controversial figure has been forced to concede that he may have to run any prospective campaign from a boat in international waters, given his alleged indictment by U.S. tax authorities.