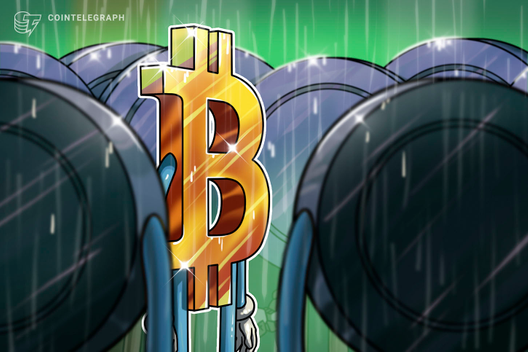 Bitcoin has staged a significant recovery from the 2018 bear market price decline, but altcoins continue to slide even lower.

Bitcoin (BTC) has more than tripled in 2019, moving from under $4,000 at the start of the year and then topping out at a little under $14,000 in June. In the earlier part of 2019, altcoins seemed to be performing strongly, with many calling the trend “altseason.”

However, since Bitcoin began its 2019 charge starting with the “April Fool’s day rally,” most altcoins seem to be slipping when compared to the top-ranked cryptocurrency. There is now a growing debate about whether the altcoin market will experience the same massive price gains seen in Bitcoin during this current bullish cycle. Within this expanding debate, there are several viewpoints. Some say Bitcoin’s dominance will continue to increase while altcoins continually lose ground. Others posit that previous cycles have seen altcoin rallies coming after bullish fatigue sets in for Bitcoin. 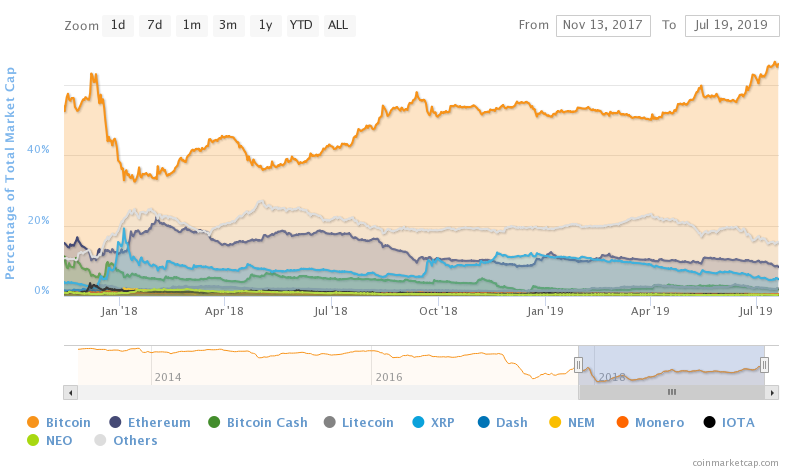 Whether altseason returns or not, the only point for consonance appears to be the idea that the current bull cycle could have profound ramifications for the still infant market. Several commentators say cryptos are becoming a more mature asset class, which could lead to wider adoption.

In late 2017, the cryptocurrency market arguably captured attention in the financial sector and beyond. Bitcoin rose to almost eclipse the $20,000 price mark while altcoins also posted all-time highs. The following year, many cryptocurrencies saw these gains virtually wiped out as the market endured a prolonged bear decline. The average price dip across the board was more than 80%.

Many analytical autopsies of the 2017 bull run converge at the conclusion that the sharp price gains were likely fuelled by hype-driven mania for cryptos as a new asset class. Retail investors struck with a fear of missing out (FOMO) rushed to put money into any and all crypto tokens in the hopes of becoming early backers of the “next Bitcoin.”

This FOMO-driven hype occasioned by the initial coin offering (ICO) boom also generated sufficient tailwind for Bitcoin to reach its all-time price high in mid-December 2017. ICO tokens generated a lot of buzz for the altcoin market as well. While the 2018 bear market did not discriminate in its wipeout of the 2017 price gains, the 2019 recovery hasn’t been as widespread across the market. To get a clearer picture of the situation, consider the following comparison by Twitter user and cryptocurrency analyst StopAndDecrypt:

There is also another means by which to observe Bitcoin’s increasing dominance over altcoin species. This method requires using the BTC price as the baseline for measuring altcoin price-performance within a specific time period, and the results appear even more dire for altcoins.

Take the ETH/BTC pair, for example, which is down to its lowest ratio. Take United States dollar valuations away and the altcoin performance becomes a tale of declining value. 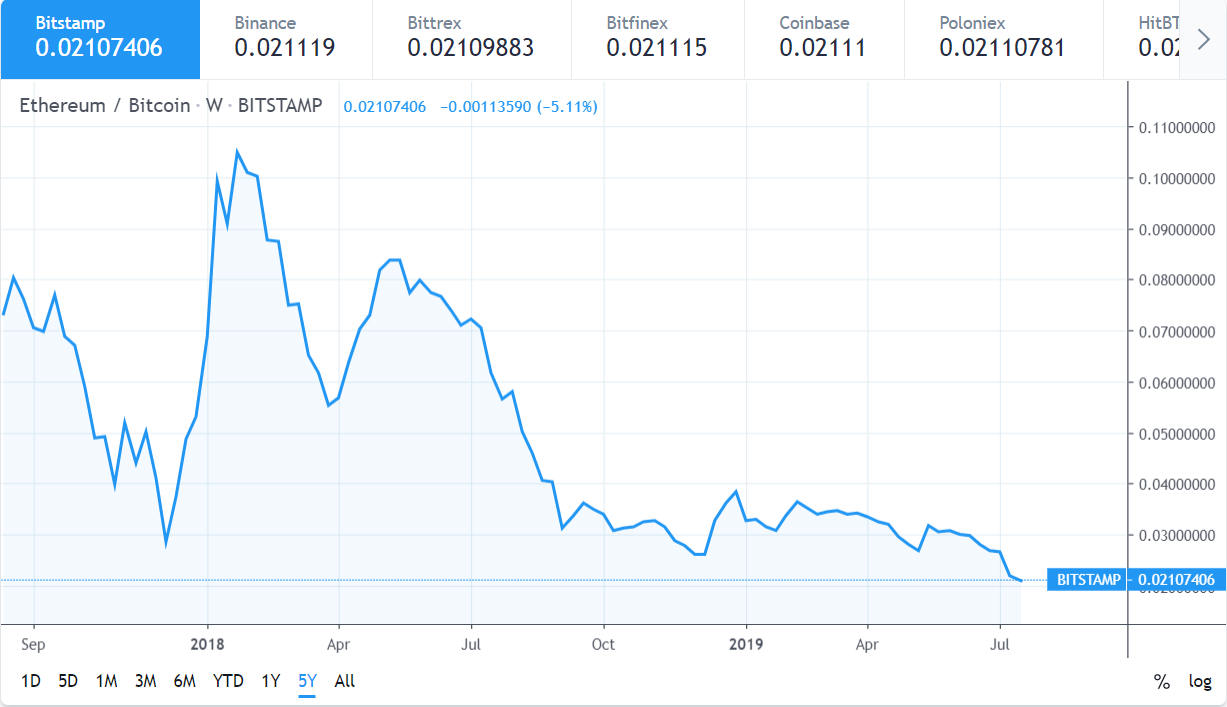 “’Altseason’ was just a flash in the pan caused by Bitcoin miners delaying a protocol upgrade and massively profiting from altcoin mining. We’re now returning to 2013 where alts are effectively unused bad jokes like BBQCoin or PPCoin.”

It is mid-2019 and there are hardly any updates from the ICO projects that raised millions of dollars back in 2017. The story for many of these startups can be distilled into the following points.

In a private correspondence with Cointelegraph, John Meyer, a managing partner at Starship Capital, provided some commentary on the evolving value proposition narrative in the emerging altcoin landscape stating:

“Most altcoins provide little-to-no tangible value or real-world use. Expect these altcoins to evaporate in short order. However, there is tremendous user-driven momentum in cryptocurrencies that are providing real-world utility on blockchains with tangible value on key industries around the world.”

For crypto bulls like John McAfee, the altcoin market isn’t dead in the water and the current price slide only represents an opportunity for savvy investors to reap the rewards of another altcoin boom having earned returns from Bitcoin’s bullish advance.

McAfee’s bullish altcoin forecasts appear tilted toward privacy coins and medical coins. In multiple tweets published in 2019 alone, the cybersecurity expert and crypto loudmouth has predicted a coming resurgence in the price of these altcoin variants before the end of 2019.

As previously reported by Cointelegraph, global blockchain penetration in the health care sector is expected to reach $1.7 billion by 2026, based on findings released by Acumen Research and Consulting.

McAfee even clashed with veteran trader Peter Brandt earlier in July 2019 on the issue of altcoins regaining a foothold in the market. At the time, Brandt sounded a literal death knell for altcoins, but McAfee disagreed in a tweet, saying:

“@PeterLBrandt says altcoins are done. His knowledge is Stone Age. Bitcoin will forever be a store of value, but each transaction allows both parties to see inside their wallets ever after. If banks did this you would scream. Privacy coins don’t have this flaw. Just one example.”

Tom Lee of Fundstrat Global Advisors also shares similar sentiments with McAfee, stating on multiple occasions that altseason will make a reappearance once BTC reaches a new all-time high. Many of these positive predictions for altcoins appear rooted in historical precedents. However, there is a growing consensus within the industry that the market has evolved since the last bull run in 2017.

In an email to Cointelegraph, Igor Chugunov, CEO of Credits — a blockchain startup that focuses on decentralized apps (DApps) development — argued that altseason will return, commenting:

“The bubble didn’t burst, it is better to say that it is just starting to inflate. The formation of the fundamental components of the cryptocurrency ecosystem is underway, the ICO era and the time when cryptocurrency could be considered as a tool for quick earnings have passed. I can say with confidence that the altcoin season will begin together with the adoption of technology, it is the technology that will determine the future liquidity of the market of altcoins and the general vector of market development. The future season of altcoins won’t cover the whole list of altcoins, it will be related to the coins that present definite value for space.”

Is the fated “cryptocalypse” at hand?

Holding BTC over the last 365 days (as at press time) would mean a 62% gain. However, for the top-10 altcoins in mid-July 2019, the situation is the polar opposite. Of these top-10 altcoins from a year ago, only Litecoin (LTC) has a percentage decline below 50%. Iota suffered the most, dropping more than 80% during the period. Others such as XRP, ETH and BCH have fallen by 58%, 68% and 75% respectively.

Litecoin’s mild decline is due to its strong performance for most of the year thus far. As far as top-10 altcoin price gains go for 2019, LTC has repeatedly been at the top. During its period of positive price performance, some analysts pointed to the upcoming block reward halving event as the key driver.

There have been numerous comparisons drawn between the cryptocurrency scene and the dot-com era of the 1990s and early 2000s. Apart from the potentially paradigm-altering potential of cryptos, some analysts have also drawn another likely commonality between the two eras — the crash of the market.

Often times, there is the talk of a coming crypto apocalypse that would eliminate from existence many of the over 2,000 altcoin species around today. The aftermath would be similar to the period of the post-dot-com bubble, which saw the rise of the internet giants known across the globe in this present time. Brandt encapsulated this argument in a tweet published at the back end of June 2019, saying:

“Many altcoins benefited from the last bull run in $BTC. Cryptomaniancs expect alts to do so again — they may be very disappointed. 2000 .com bubble is analog. Following 2001-02 tech collapse, dotcoms with real value exploded. The ‘alt’ .coms went bankrupt.”

Whether judgment day is at hand for altcoins remains a matter of debate, but there are some projects already showing disturbing signs. A report by blockchain data analytics firm Coinmetrics, for example, showed that a weather app was responsible for about 96% of the total transactions on the Bitcoin SV blockchain.

During the 2018 bear market, commentators like Xapo President Ted Rogers expressed the belief that the price downturn could be the beginning of a mass extinction event for altcoins. For Rogers, as many as 90% of all altcoin variants stood the risk of becoming nonexistent.

Rogers isn’t alone in this belief, as Barry Silbert of Digital Currency Group and Bitwise Asset Management’s Matt Hougan have also espoused similar sentiments. As reported by Cointelegraph in mid-February 2019, Silbert predicted that most altcoins “will go to zero,” while declaring Bitcoin to the premier cryptocurrency. Also in February 2019, Cointelegraph reported Hougan saying that 95% of all cryptocurrencies will die.