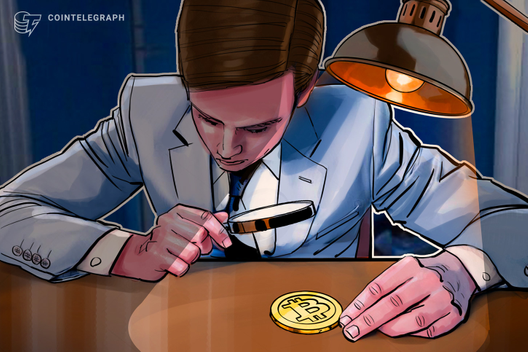 Cryptocurrency compliance company Elliptic has released the Elliptic Data Set, geared toward identifying cryptocurrency transactions associated with money laundering (AML). The development was announced in a press release shared with Cointelegraph on Aug. 2.

Having developed a data set of 200,000 Bitcoin (BTC) transactions with a total value of $6 billion,  Elliptic claims it to be the largest set of labeled transaction data publicly available in any digital currency in the world.

According to the announcement, the product is designed to help users more efficiently identify illicit transactions, as well as transactions associated with money laundering, sanctions violations or terrorist financing (CFT). At the same time, the product should reduce compliance costs and eventually eliminate criminal activity from cryptocurrencies.

Mark Weber, co-author of the paper that Elliptic scientists have co-authored with researchers from the MIT-IBM Watson AI Lab dubbed “Anti-Money Laundering in Bitcoin: Experiments with Graph Convolutional Networks for Financial Forensics,” commented on the data set release:

“Graph convolutional networks are still a young class of methods, and we’re in the early days in these experiments, but we do believe GCN’s power to capture the relational information in these large, complex transaction networks could prove valuable for anti-money laundering.”

In late June, Financial Action Task Force’s announced that it is planning to strengthen control over cryptocurrency exchanges to preclude digital currencies from being used in money laundering and related crimes. Secretary Steven Mnuchin said then:

“By adopting the standards and guidelines agreed to this week, the FATF will make sure that virtual asset service providers do not operate in the dark shadows. This will enable the emerging FinTech sector to stay one-step ahead of rogue regimes and sympathizers of illicit causes searching for avenues to raise and transfer funds without detection.”

That same month, Coin Center — a nonprofit research and advocacy center focused on crypto-related public policy issues — urged Her Majesty’s Treasury not to over-broaden the scope of the United Kingdom’s AML/CFT regulations. Coin Center went on to claim that expanding AML surveillance obligations to crypto exchange software developers or users would, according to Coin Center, “violate U.K. citizens’ free speech and privacy rights.”