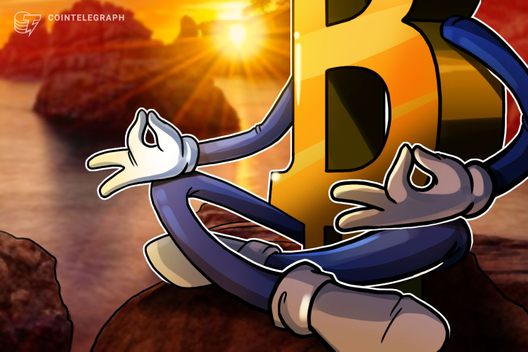 China’s recent currency devaluation seems in line with similar policies taking place across the globe. Let’s take a look why Bitcoin price is rising as a result and why investors are increasingly considering taking shelter in Bitcoin — a neutral and borderless network for storing and transferring value — alongside traditional safe haven assets.

Every fiat currency is devaluing itself on purpose

As the U.S. and other countries attempt to bolster economic growth through rate cuts, investors are beginning to flock to gold, cash, government bonds and increasingly Bitcoin as a hedge, according to economist, Raoul Pal.

In a Twitter thread, the former Goldman Sachs executive makes the case for why the world is fast approaching a currency crisis. Pal also believes Bitcoin will thrive throughout the impending monetary carnage. He warns that:

“We are at the most important juncture in FX markets in my entire 30 year career. The dollar appears at risk of an uncontrolled rise.”

Pal points out that the Fed Broad Trade Weighted Dollar Index is literally on the verge of breaking above a massive cup and handle pattern at 130. 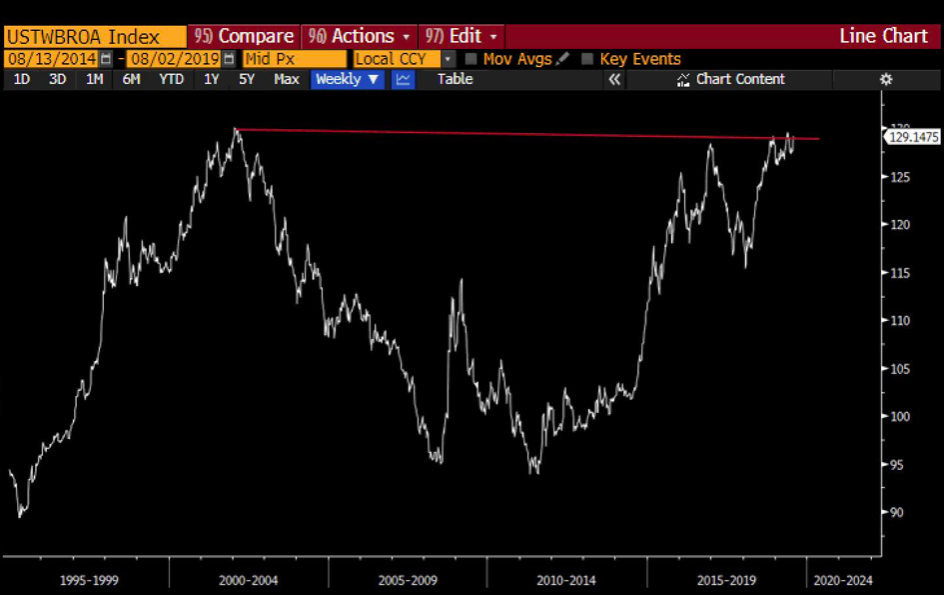 Meanwhile, the ADXY (Asia Dollar) index is about to fall below a crucial trendline. Pal says a fall of 20% or more across ALL Asian major currencies has brought the index face to face with what he calls the “cliff of death.” 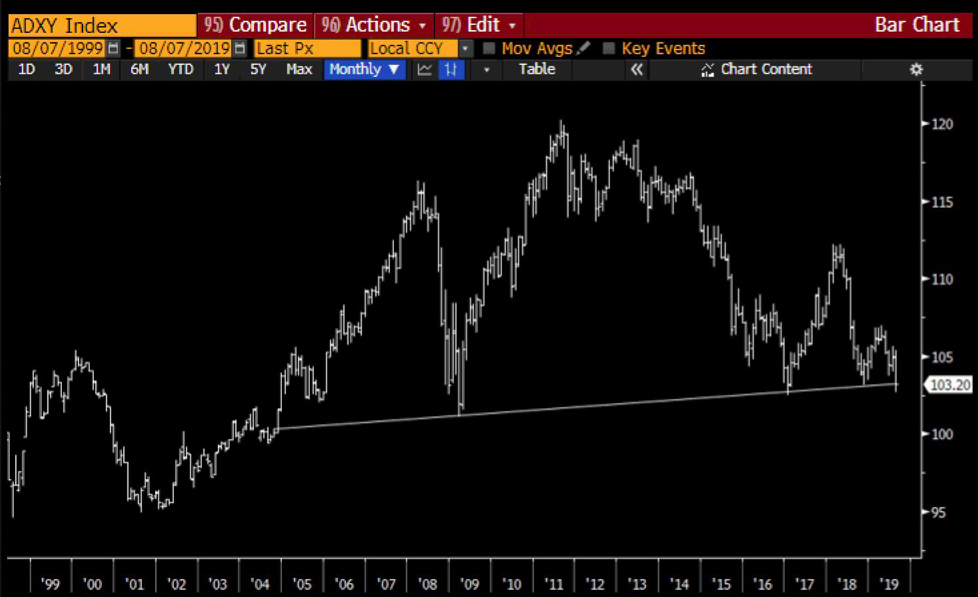 JP Morgan’s Emerging Markets Currency Index is also worse for wear and on the verge of dropping to a new low. 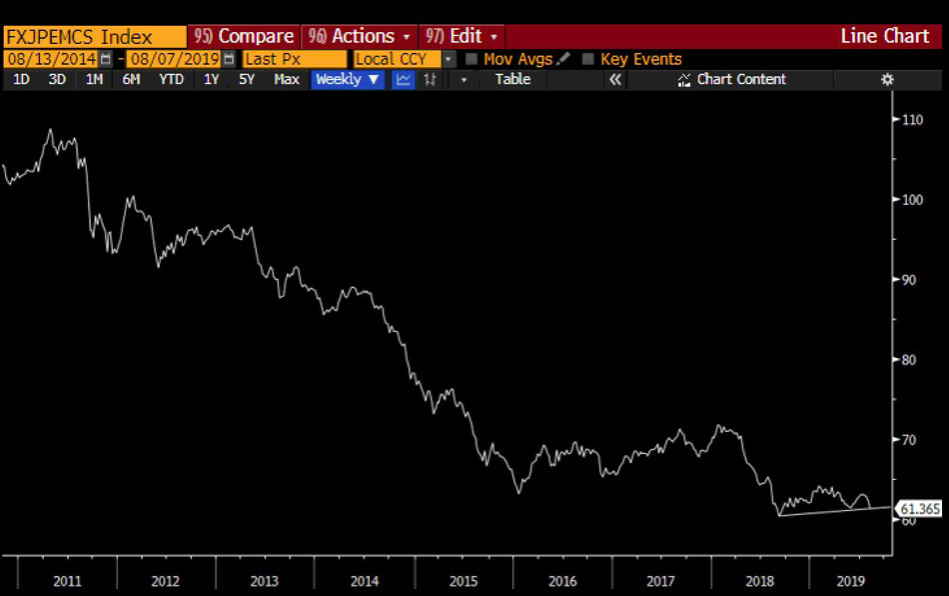 At least seven other fiat currencies are also dropping in value, Pal notes, concluding that a strengthening dollar is catalyzing a massive global deflationary wave, which could lead to a financial crisis. The silver lining, however, is that this could be very bullish for Bitcoin price.

“Sadly, we are at one of the BIGGEST junctures for markets in history. You may disagree with my assessment of the odds. It doesn’t matter. But you simply CANNOT ignore the risk.

Thanks for paying attention.”

Investors are becoming increasingly nervous as central banks have demonstrated they will continue easing. Late last week, the United States Federal Reserve announced that it would cut interest rates and less than a week later China devalued its currency. 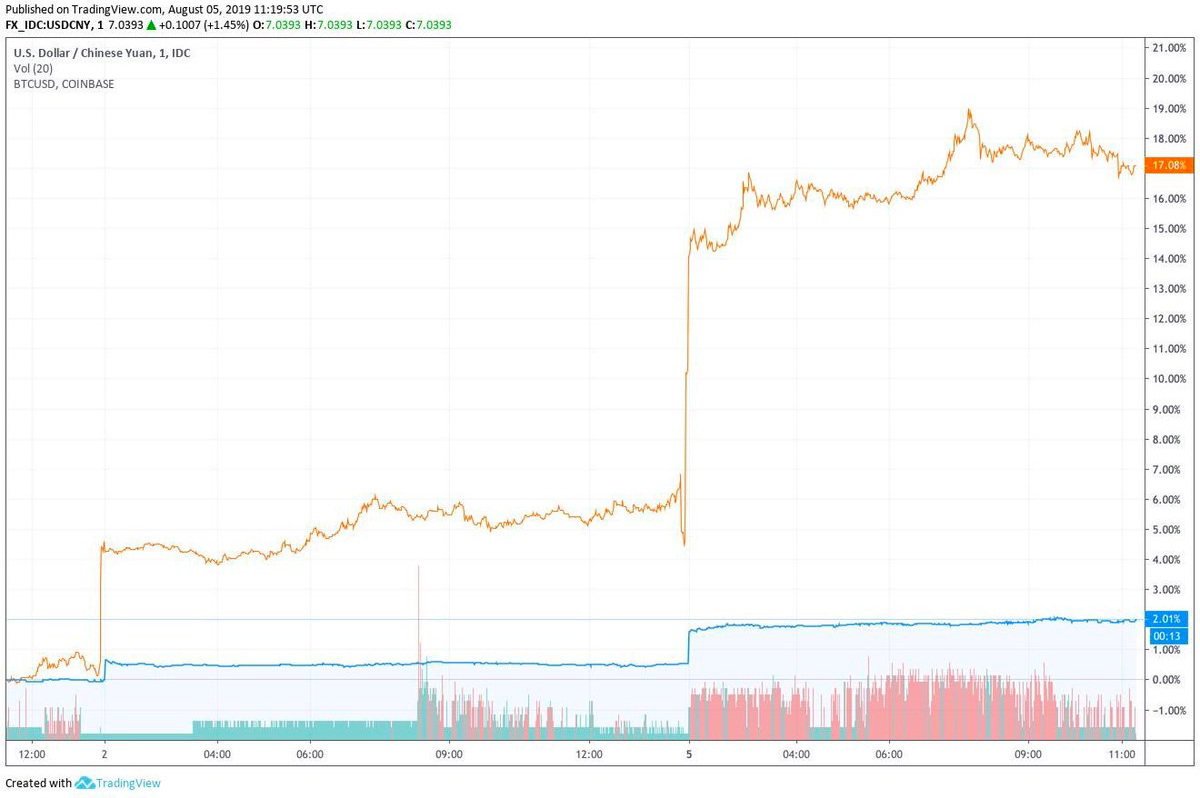 It’s clear that CNY to USD outflow is influencing the price of Bitcoin as the latter is up over 14% in the past week. What’s more, the latest data from SFOX shows that Bitcoin is the least correlated with traditional markets. 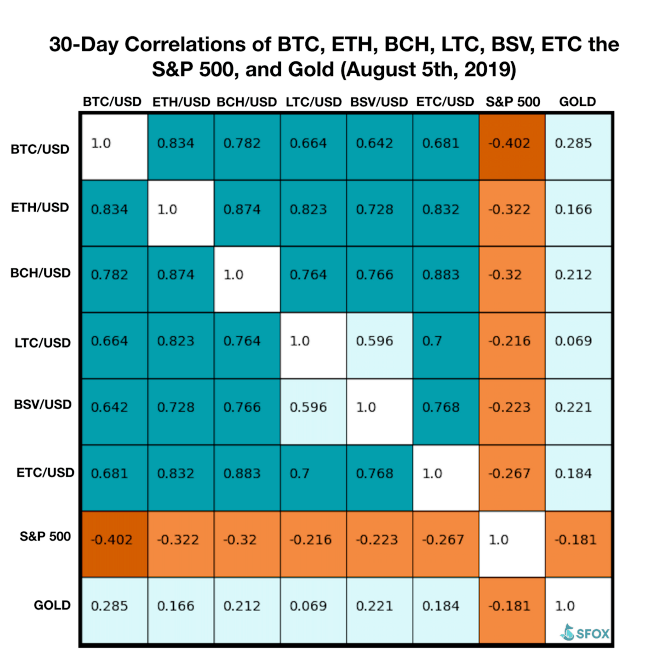 At the same time, the central banks of U.S. and China are not the only ones racing to the bottom. Just recently, the Bank of Thailand reduced its rate by 25 basis points, a first since 2015 while Reserve Bank of New Zealand also introduced a 50 basis point cut, which came as a surprise to many investors.

Additionally, India’s reserve bank also slashed rates by 35 basis points. Worth noting, India’s central bank rate appears to be in an inverse relationship with Bitcoin price over the past years, according to a chart posted by Global Macro Value Quant Expert, John M. Spallanzani. 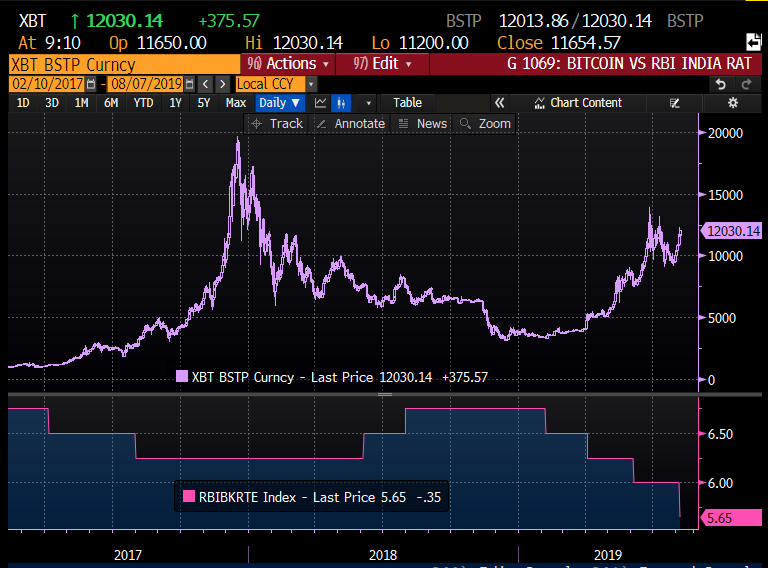 Interestingly, rate hikes appear to coincide with Bitcoin price bottoms and vice versa over the past couple of years.

Other analysts also agree that Bitcoin is increasingly appearing on the radar of investors looking for alternative safe havens.

For example, earlier this week during an interview with CNBC, Morgan Creek Digital co-founder Anthony Pompliano discussed how Bitcoin will react to the current global monetary easing trend.

Pompliano agrees that China’s devaluation is playing a large part in Bitcoin’s current bull run. He also adds that institutions increasingly looking at Bitcoin because it has “proven to be non-correlated and to provide an asymmetric return compared against traditional assets.”

Meanwhile, Fundstrat head of research Tom Lee believes Bitcoin has decoupled from a strong dollar, which was the reason for the price slump in 2018, and “gone negative on correlation to the equity market.”

Therefore, it’s no surprise that BTC is becoming increasingly correlated with gold while significantly outperforming precious metals, traditional stocks and pretty much every asset in 2019.

Lee says this trend could accelerate as investors seek shelter from traditional equities. He also believes that the Federal Reserve’s most recent interest rate cuts will positively impact Bitcon price. On July 31, He said that:

“Bitcon’s becoming increasingly a macrohedge for investors against things that could go wrong. Rate cuts are adding liquidity. Liquidity is pushing money into all these risk assets and also hedges, which is helping Bitcoin.”

Earlier this year, Lee is said that at this rate Bitcoin is easily going to take out its all-time high.