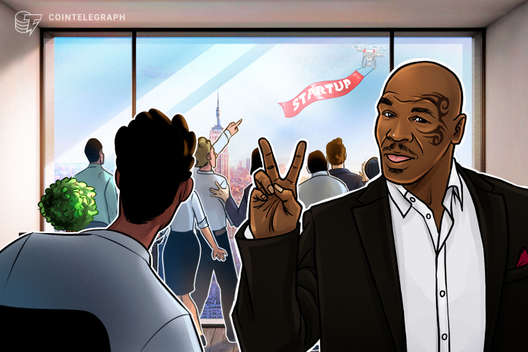 On Aug. 13, VentureBeat reported that the new venture — dubbed “Fight to Fame” — will use blockchain technology to underpin a new, multi-pronged platform that aims to catapult aspiring fighters to success via social media, reality TV, film, games, live matches and betting.

“Wealth generation from the masses”

While Tyson will serve as the founder and chairman of the sports and competition committee for Fight to Fame, the project also counts Farzam Kamalabadi as its CEO, the two-time Emmy award winner Tim Smithe as its television producer and Stan Larimer as its cryptocurrency and blockchain expert.

Tyson said in a statement that:

“As a seasoned fighter, I want to mentor future generations, especially future action stars and make sure there’s a path to career success and fair compensation. Building this global platform for them is a passion of mine.”

Fair compensation, according to Kamalabadi, is driven by a blockchain ecosystem that “solves the empowerment that didn’t exist in the internet era”:

“This is about wealth generation from the masses, but back to the masses through all the participants and stakeholders. So it is not just win-win. This is multiple wins for all the stakeholders.”

A fan token economy will be launched in order to drive engagement as well as to reap the project’s gains for the fighters, fans and company alike.

Kamalbadi and Smithe noted that in the case of industry titans such as the Ultimate Fighting Championship (UFC), fighters often walk away with just 15% of their take after fees.

More details about Fight to Fame’s planned fan token offering are due to be released in future; the tokens will apparently confer betting and voting rights on their holders and form part of a transparent blockchain-based economy for the entire ecosystem.

As previously reported, this winter the Litecoin Foundation partnered with premier kickboxing league Glory to become the official cryptocurrency for its online merchandise platform and international events.

In fall 2018, French soccer club Paris Saint-Germain — which has been hailed as the country’s “most popular” team — had partnered with blockchain platform Socios.com to incentivize and monetize fan engagement and experiences via a token ecosystem.