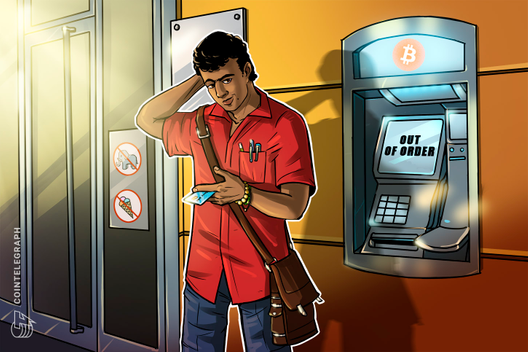 Winnipeg Bitcoin ATMs targeted with “out of order” signs.

Fraudsters in Winnipeg, Canada, have targeted Bitcoin ATM users in the city by simply sticking a poster on the machine. Police issued a warning on Aug. 29 that following the instructions on the poster will lead to an irretrievable loss of their Bitcoin.

Even with a digital currency like Bitcoin, security ultimately lies in the hands of the user, and a simple attack can often be the most effective.

Scammers in Winnipeg took exactly that tack. They attached a printed notice to the machine. The notice explained that the machine was undergoing a software upgrade. Due to this, users shouldn’t deposit their bought coins into their own wallet, but instead use a QR code provided.

The posters were found on two of the city’s twenty Bitcoin ATMs, but police said that nobody had admitted to falling victim to the scam.

In Fredericton, the capital of the Canadian province of New Brunswick, a restaurant owner was conned by a fraudster pretending to be from the power company. She was told that her latest bill payment had not been received, and that she must deposit some money into a Bitcoin ATM or the power to her restaurant would be cut off.

After depositing $1,000 CAD, she was told that the payment hadn’t gone through and she needed to deposit another $800 CAD.

Police reported a spate of similar calls to local restaurants on Wednesday. A power company representative said that they would never ask a customer to deposit cash into a random Bitcoin ATM under threat of immediate disconnection.