China’s central bank relies on centralization and suppression of open technologies such as blockchain, with its next step being to issue a national stablecoin.

The People’s Bank of China (PBoC), the country’s central bank, has announced that it is planning to launch a central bank digital currency (CBDC), inspired in part by Facebook’s Libra project.

David Marcus, the head of Facebook cryptocurrency wallet Calibra, and known as the co-creator of the company’s venture into cryptocurrencies, had this to say on Twitter:

“Like I said: if we don’t lead (and by ‘we’ I mean the Free World, *not FB*) others will. It wasn’t a figure of speech, an exaggeration, or a spin of the reality we face. It was the truth.”

In the shadow of United States President Donald Trump’s trade war with China, we are beginning to see the battle lines drawn in a war for global monetary supremacy, with China’s offering representing centralized control and including the suppression of foreign influences. Marcus’s tweet clearly alluded to this clash of East vs. West — but it’s notable that he is taking aim at U.S. regulators and Congress — in particular, the House Financial Services Committee, which is chaired by Democrat Rep. Maxine Waters — to espouse a contrasting regulatory approach based on capitalism, freedom and less central regulation.

Related: Digital Yuan: Weapon in US Trade War or Attempt to Manipulate Bitcoin?

China has historically suppressed technologies controlled by outsiders in favor of those under its own influence, and the “Great Firewall of China” has been used to suppress social media sites like Twitter, search engines like Google and messengers like WhatsApp, as well as to promote homegrown alternatives like Sina Weibo, Baidu and WeChat respectfully.

As such, foreign cryptocurrencies have been similarly suppressed in China. Back in 2018, China issued a ban on any and all crypto activities, including all access to international exchange platforms. And according to Zhou Xiaochuan — the ex-governor of the People’s Bank of China — local financial institutions have been instructed by regulators that digital currencies should not be recognized as tools for retail payments.

Thus, close observers of China should not be surprised to see the PBoC launching its own homegrown CBDC initiative despite government bans. It would be consistent with past technology policies for foreign cryptocurrency projects to be suppressed in favor of this upcoming PBoC coin, and it would also be consistent for this project to be highly centralized.

The government of China has had a tremendous history of benefitting from the power of centralization — but it also has a deep understanding of what a revolution looks like and where it can come from. As such, it has been quick to nip cryptographic assets in the regulatory bud.

While China is expected to launch a single, centralized, monolithic digital currency and suppress all others, the West is expected to launch a plethora of initiatives — both for retail payment and remittances, such as Facebook’s Libra and Telegram’s TON, but also business-to-business, or B2B, examples such as JPM Coin and Signature Bank’s digital payments platform called Signet.

The battle for stability

One of the biggest criticisms to date of cryptocurrencies for payments is their volatility, which is illustrated most strikingly by the story of Lazlo Hanyecz (who paid 10,000 Bitcoins for a couple of Papa John’s pizzas in the early days of Bitcoin). Another major criticism is the uncertain regulatory status, especially in regard to the status of cryptographic assets as a security in the eyes of regulators such as the U.S. Securities and Exchange Commission (SEC).

If a cryptographic asset were to maintain a stable value, it would be hard for the SEC to view it as a security, which requires that buyers expect appreciation in the value of securities. This emboldens compliant players such as Facebook or large banking institutions, which have everything to lose from any compliance irregularities.

Because of the regulatory certainty and usability of so-called “stablecoins,” consumer-facing payments would be a killer application for regulated financial services on blockchain.

Payments will generally have two kinds of suppliers: banks and messengers. The banks will be the suppliers of interbank and enterprise payment networks — e.g., the People’s Bank of China coin, JPM Coin or Signature Bank’s Signet project).

The second kind of supplier will be the dominant provider for consumer payments, including peer-to-peer (P2P), e-commerce, in-game, point-of-sale and international remittance applications — namely, mobile messenger apps. The biggest in this category is, of course, Facebook’s Libra project.

But Libra is not alone in this space — South Korea’s messenger Kakao has launched a similar project based on a public blockchain called Klaytn. Telegram (which raised $1.7 billion) is launching TON, which is tied to its messenger that claims over 200 million users. And in the Japanese market, the dominant messenger, Line, has partnered with Visa and promises to bring its user base of over 200 million users onto the blockchain.

The use of a mobile messenger as a consumer payments platform is already a proven application in China, where WeChat Pay and AliPay are the dominant payment providers (neither of which currently use a blockchain-based cryptographic asset). The S&P recently conducted a survey that found 90% of adult internet users in China use WeChat Pay, 94% use Alipay and 86% use both. This duopoly also becomes a factor in the global payments clash between East and West.

With the huge potential of users coming from messengers, logical payment applications include P2P payments (especially since messengers come with user identities, prebuilt social graphs and communities, trusted friends and family networks, and the ability to communicate about or request payments), in-game payments (as game economies include virtual goods and become a natural target because mobile apps are a natural environment to deliver virtual goods), online services (including music and online content subscriptions), e-commerce (which may come later due to the need for real-world delivery of goods) and remittances.

Why “stablecoin” is a bad name

First of all, stability is a feature rather than a category. Generally speaking, most stablecoins belong to the category of asset-backed tokens. In most cases, the assets are held in a reserve, and if the market value of the coin were to drop, the reserve assets are used to buy back the coin until it regains the target price level.

Similarly, more coins can be released from a reserve if the demand for the coin warrants. A reserve ratio determines how much of an asset is needed in order to support the stability of the price of a coin. Obviously, a 100% (or greater) reserve ratio should preserve a 1:1 ratio of the coin to the underlying asset, thereby theoretically allowing a coin to maintain stability.

The reason why “stablecoin” is a bad name is that there are literally no assets in history that have been known to exhibit a stable value over time — they are only stable relative to the value of another asset. Because of this, there isn’t any universal way to establish a stable threshold of value that is long-lasting.

Another optional property of a stablecoin is redeemability — which means any holder of the circulating asset can, at any time, redeem the circulating asset for the asset in the reserve. The U.S. dollar, for example, isn’t itself stable over time, as the purchasing power of USD has dropped by 95% since 1913. 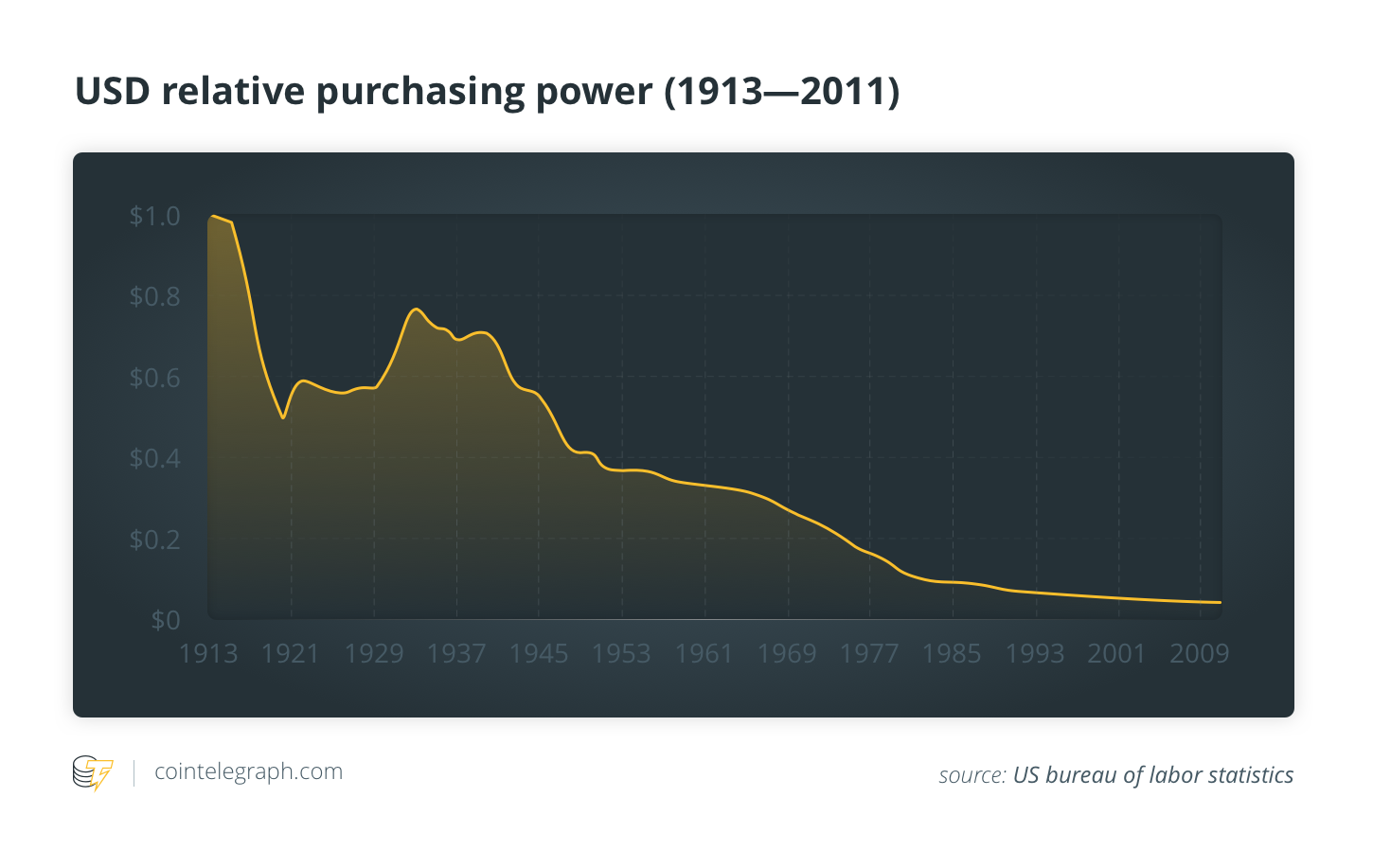 This decline accelerated in 1971, when the dollar ceased to be backed by gold and silver. Because of this, a cryptographic asset tied to the price of the U.S. dollar (or any other asset) should not be considered a “stable” coin but rather a “pegged coin” — meaning that its value is pegged to the value of something else.

Therefore, a stablecoin can only be less stable that the underlying asset, never more. This is why Facebook has opted to use a trick adopted by central banks, which is to hold a basket of relatively stable assets — typically other national currencies — which reduces the risk exposure to single currencies.

Another reason why “stablecoin” is a misnomer is that stablecoins aren’t even stable relative to the underlying asset — they are typically subject to small fluctuations that are either regulated by the central bank controlling the money supply or by arbitrage traders who expect the central bank to restore the pegged value.

But the biggest reason why “stablecoin” is a terrible name for any cryptographic asset is that it’s typical for any pegged, centrally banked asset to be relatively stable vs. the underlying asset — until it’s not. A pegged asset like a currency can lose its peg, which generally results in devaluation of the currency — typically because the reserve is insufficient to buy the value of the currency back up to the pegged level.

In general, schemes that maintain a high reserve ratio maintain a basket of reserve assets, don’t expose themselves to market speculators and offer redeemability have the highest chance of maintaining their value.

Where it would lead

With the announcement of Libra by Facebook, every player in the game no longer has to guess what the table stakes are, and it’s time for the players to put their antes in. The People’s Bank of China reportedly added nongovernmental organizations to its network. “Inspired by Libra” and by the work South Korea’s Klaytn is doing with its governance council, the PBoC has certainly mirrored what Facebook has done with the Libra Foundation.

With billions of messenger users and bank customers being introduced to blockchain-based payment solutions, we can be sure that every major organization in the world will have to craft a response to this unprecedented situation. And the competition between nations and ideologies — such as China vs. the West — can actively accelerate the delivery of solutions that will form the basis for mass adoption of cryptographic assets.

Miko Matsumura is a co-founder of the Evercoin Exchange, a noncustodial mobile wallet-based exchange, and a general partner at Gumi Cryptos, an early stage venture capital investor in cryptographic assets and blockchain technologies. Gumi Cryptos is a member of the governance council of Klaytn, the public blockchain and payment token for the Korean messenger company Kakao.