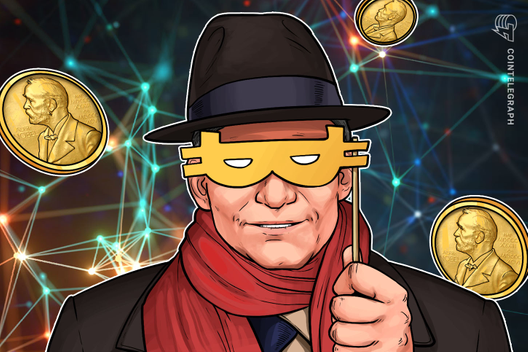 American investor and co-founder of Morgan Creek Digital Assets Anthony Pompliano has argued that Satoshi Nakomoto should be awarded the Nobel Peace Prize for inventing Bitcoin.

“Satoshi should win the Nobel Peace Prize. We finally have a currency that can assume global reserve status without anyone having to engage in violence.”

And the prize goes to… X

Pompliano’s proposal faces the obvious hurdle of Nakamoto’s now-legendary disappearance in late 2010 — which has spurred almost as much speculation and fervent interest as the cryptocurrency he, she, or they invented on Oct. 31 2008 with the publication of the Bitcoin white paper.

Pragmatic considerations aside, Pompliano’s argument taps into the belief among many passionate advocates of cryptocurrency that national fiat currencies are essentially “violence-backed” —  their hegemony founded upon a history of coercion, centralized control of supplies and a monopoly of power.

In the 3rd century, Chinese emperor, Qin Shi Huang had standardized the currencies of different warring states, producing the first unified currency for the empire, the bàn liǎng.

In the wake of the second world war in the last century, America’s ascendancy to world economic superpower saw the dollar transformed into a global reserve currency — both a mirror to the country’s preeminence and an instrument with which to lock down its influence and clout.

Fast-forward to the 21st century and national fiat currencies and the reserve banking system are weathering intensifying geopolitical shocks across the globe.

With the last decade’s invention of decentralized cryptocurrencies — as well as more recent news that tech behemoths like Facebook are now attempting to co-opt the technology that underlies them to create their own digital currency networks — the currency landscape and traditional stewards of monetary policy are faced with arguably unprecedented challenges.

Amid the tumult of the protracted U.S.-China trade war, the director of the People’s Bank of China research bureau recently argued that China was being prompted to issue its own digital currency because of the potentially overweening role the United States dollar would assume in tandem with Facebook’s Libra currency. He wrote: