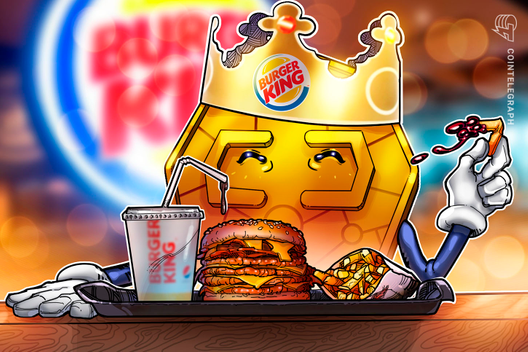 Bitcoin payments in the food and beverage industry: What problems do restaurants like Burger King and their visitors face?

The German branch of Burger King has begun accepting Bitcoin (BTC) on its website and mobile app, as reported by Cointelegraph on Sept. 3. But has the initiative increased consumer demand for the company’s fast food, and is it really possible to buy the popular Whopper burger with Bitcoin? What difficulties has the restaurant faced in its three years of cryptocurrency experience?

Burger King was one of the first international fast-food chains to accept Bitcoin as a means of payment. For the first time, visitors were reportedly able to buy burgers with crypto back in 2016 when the Netherlands branch of Burger King started accepting Bitcoin, with the first restaurant offering burgers to crypto holders located in Bitcoin-friendly Arnhem. The announcement was made by the first Bitcoin embassy on Feb. 18, 2016.

The Burger King Arnhem branch also announced that any customer who pays in Bitcoin will get a second Whopper for free and that the restaurant will host special meetups for those interested in digital currencies.

However, on May 31, the Arnhem Bitcoinstad representatives announced that local Burger King restaurants have stopped accepting Bitcoin and the digital currency payment initiative was just a temporary promotional campaign:

“Unfortunately, Burger King no longer accepts bitcoins after 31 May. So you only have a chance this month to take advantage of their offer! If you pay Whopper with bitcoins, you will receive a second Whopper for free!”

You can’t use or trade WhopperCoin

Since that time, crypto burgers have reached Russia. Burger King Russia announced a new payment method and even released a WhopperCoin loyalty bonus. But has anyone heard anything about Bitcoin and Burger King since then? Hardly.

On Aug. 25, 2017, 1 billion WhopperCoins (WHO) were issued using the Waves blockchain. The new cryptocurrency was intended for buying Whoppers or other burgers and sides. In particular, the company promised a free flagship Whopper to any customer who accumulates 1,700 coins.

At the same time, Burger King Russia actively promoted its cryptocurrency, and the translated statement claims that “eating Whoppers today makes for a financially prosperous tomorrow.” One can find out whether WHO holders have gained financial success by looking at the trading charts on the YoBit exchange. To date, YoBit is the only exchange on which WHO is listed, although WHO-BTC trading volumes stand at zero.

It’s not so easy to find a Russian Burger King restaurant where Bitcoin payments are accepted, nor is it possible to make an online order using crypto. This may be caused by the active interference of Russian authorities in the local franchise’s activities. Specifically, the Moscow prosecutor’s office repeatedly summoned representatives of Burger King Russia to explain the operation of WhopperCoins and confirm that the company hadn’t issued its tokens for general use, reminding them about the illegal nature of cryptocurrency operations in Russia.

Related: Crypto Taxation Around the Globe — What Do Regulations Look Like?

After two years of silence, the Burger King-Bitcoin tandem reappeared in the media, with the German division’s announcement that it will now accept Bitcoin payments on its delivery site and mobile app. The news and subsequent user discussion quickly spread across the internet:

To increase the volume of its retail sales, Burger King has created a mobile application. It was reported that San Diego’s Tillster, which seeks to adapt to the ever-growing customer base of a restaurant chain and the requirements for a well-scalable payment system, has become a partner in its creation. Perse Faily, CEO of Tillster, said:

“For consumers, they are able to utilize a convenient easy way to pay for their goods and opt-in to additional services that brands are developing, […] such as loyalty programs, exclusive coupons and other engagement tools.”

Notably, Burger King chose to remain silent about the new payment method, while a more detailed study showed that its restaurants have nothing to do with Bitcoin, although its partner does.

So, can a burger be bought for BTC at a Burger King in Germany? Yes, but not in its brick-and-mortar restaurants. One can pay with Bitcoins and Bitcoin Cash (BCH) by ordering delivery online through the Lieferservice delivery service, which works with restaurants throughout the country. In other words, it’s akin to Apple announcing that AirPods have become available for purchasing online, but were actually sold on Amazon. As it appears, this is not Burger King’s own initiative. 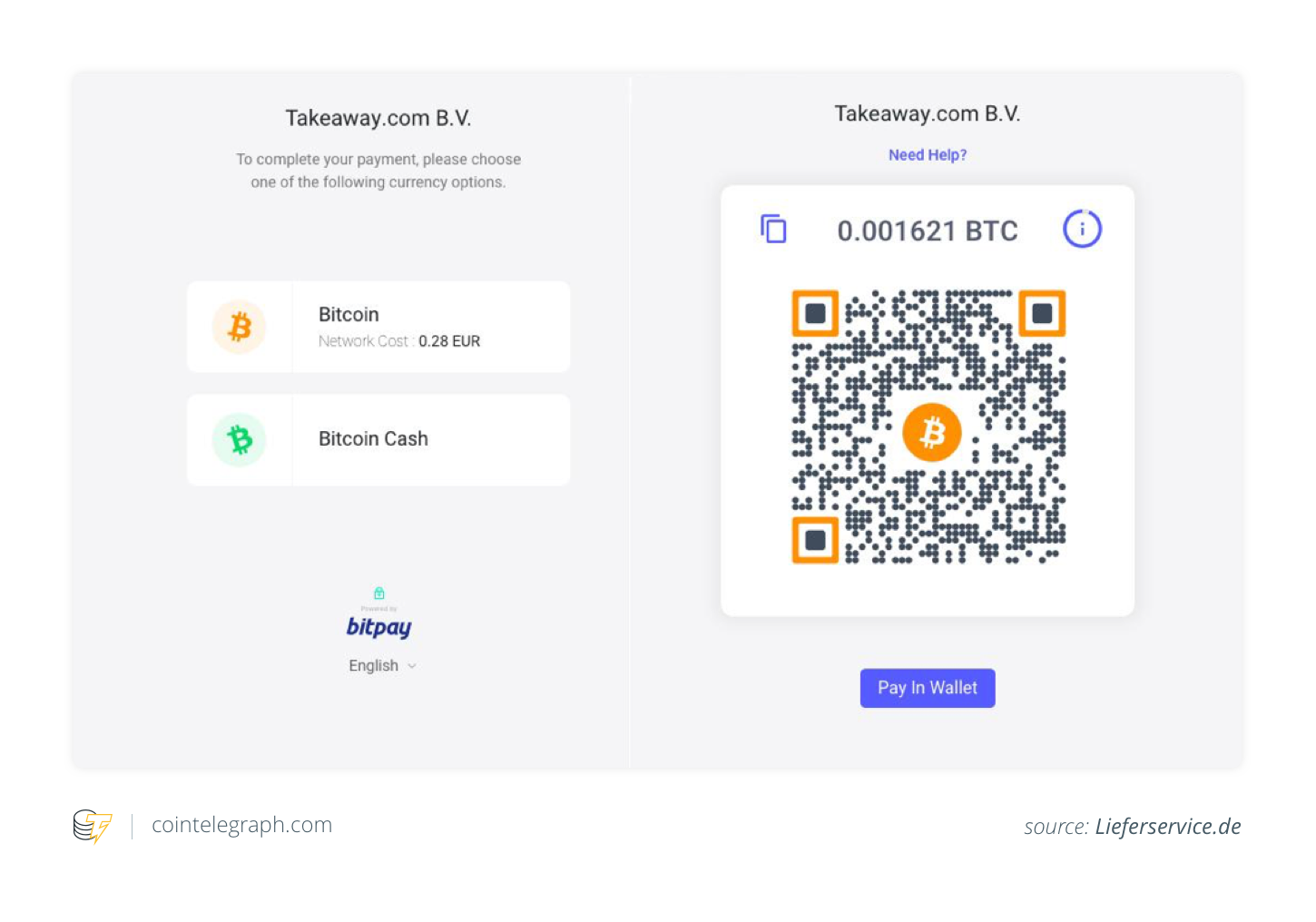 At the same time, Burger King Lieferservice redirects users to BitPay upon ordering products, which, in turn, generates a QR code for payment in Bitcoin or Bitcoin Cash.

Where can I really pay with Bitcoin?

Judging by interactive Coinmap statistics, the number of offline venues accepting Bitcoin today exceeds 15,400. From time to time, information appears on the internet that visitors of one establishment or another can pay with cryptocurrency. In May, United States-based payment service Flexa enabled Starbucks and 14 other retailers to handle Bitcoin transactions. In July, Singapore’s food chain KOPItech installed special stall-specific kiosks for customers to order food using cryptocurrencies. But does any of this really work?

With Bitcoin, Ether (ETH), Litecoin (LTC) or Dash, one can buy burgers, street food, coffee, pizza, or sushi in the U.S., Australia, the United Kingdom, Russia, Canada, Japan, Malaysia and even Kenya. In the Estonian capital of Tallinn, the convenience of cryptocurrencies was much appreciated by coffee houses — clientele can pay with crypto at 10 venues. A cryptocurrency wallet can be used to buy pastries at Dublin’s Krust Bakery and sweets at Rom’s Steccolecco. Meanwhile, cryptocurrency payments are accepted at 94 restaurants to date in the U.S., according to BitcoinRestaurants.net.

In most cases, small, private venues or local franchises of large chains are the ones taking the initiative. As for the latter, the idea of ​​using cryptocurrencies as payment has usually come from a local restaurant owner and is an advertisement in nature. A popular example is when the Canadian branch of another fast-food giant, KFC, announced a temporary promotional campaign on Jan. 11, 2018 that included BTC payments. The restaurant owners decided to support the popularity of cryptocurrencies by adding “Bitcoin Basket” to the menu — i.e., a bucket of chicken wings.

Related: Blockchain for Food, How the Industry Makes Use of the Technology

A competitor of KFC, Subway, has also been reportedly attempting to set up Bitcoin payments to attract customers. Emily Rossi from Ruder Finn, a PR agency claiming to work with Burger King, noted that, as a rule, such promotions are temporary:

“It seems that the one restaurant that was accepting bitcoin may no longer be accepting it. Again, though, it varies by restaurant since each is independently owned and operated, so it’s up to each franchisee, not headquarters.”

How to pay with Bitcoins?

In most cases, restaurants and cafes use a QR code to receive cryptocurrencies, and the role of processing is assigned to operators such as BitPay and Coincheck. Meanwhile, developing countries often resort to local mobile applications that are developed to order.

By scanning the QR code, customers are able to transfer money from their cryptocurrency wallets to the ones belonging to venues. Transaction records are permanently stored on the blockchain, while account information remains private.

Atila Ajdinovski, the owner of a Bitcoin-friendly restaurant in North Jersey, claimed that using cryptocurrency as a form of payment could be more secure than paying with a credit card:

Despite prohibitive cryptocurrency laws, many venues are forced to come up with backdoors. One of these is converting client funds into fiat money, while conducting internal accounting in the traditional currency. Many restaurants try to circumvent the law by calling their cryptocurrency “loyalty bonuses,” like Russia’s Burger King and Lavka-Lavka, a farm-to-table restaurant chain. The owners of both establishments have repeatedly attracted the attention of authorities and even dealt with lawsuits.

Another problem faced by cafes wishing to accept cryptocurrency is the lack of widespread use of digital money. This question is especially relevant in developing countries. The venues have found a solution by installing crypto machines that exchange fiat for BTC, allowing everyone who wants to try something new but lacks cryptocurrencies to use the machine. Such an initiative was introduced in Prague, a unique project of a cafe and coworking center where payment is made exclusively with digital currency.

That being said, when a restaurant doesn’t pay for the transaction fee, the client may encounter paying a rather high one in some cases. A customer of a Ukrainian restaurant paid around 21% for processing the payment, sharing his negative experience on the internet: 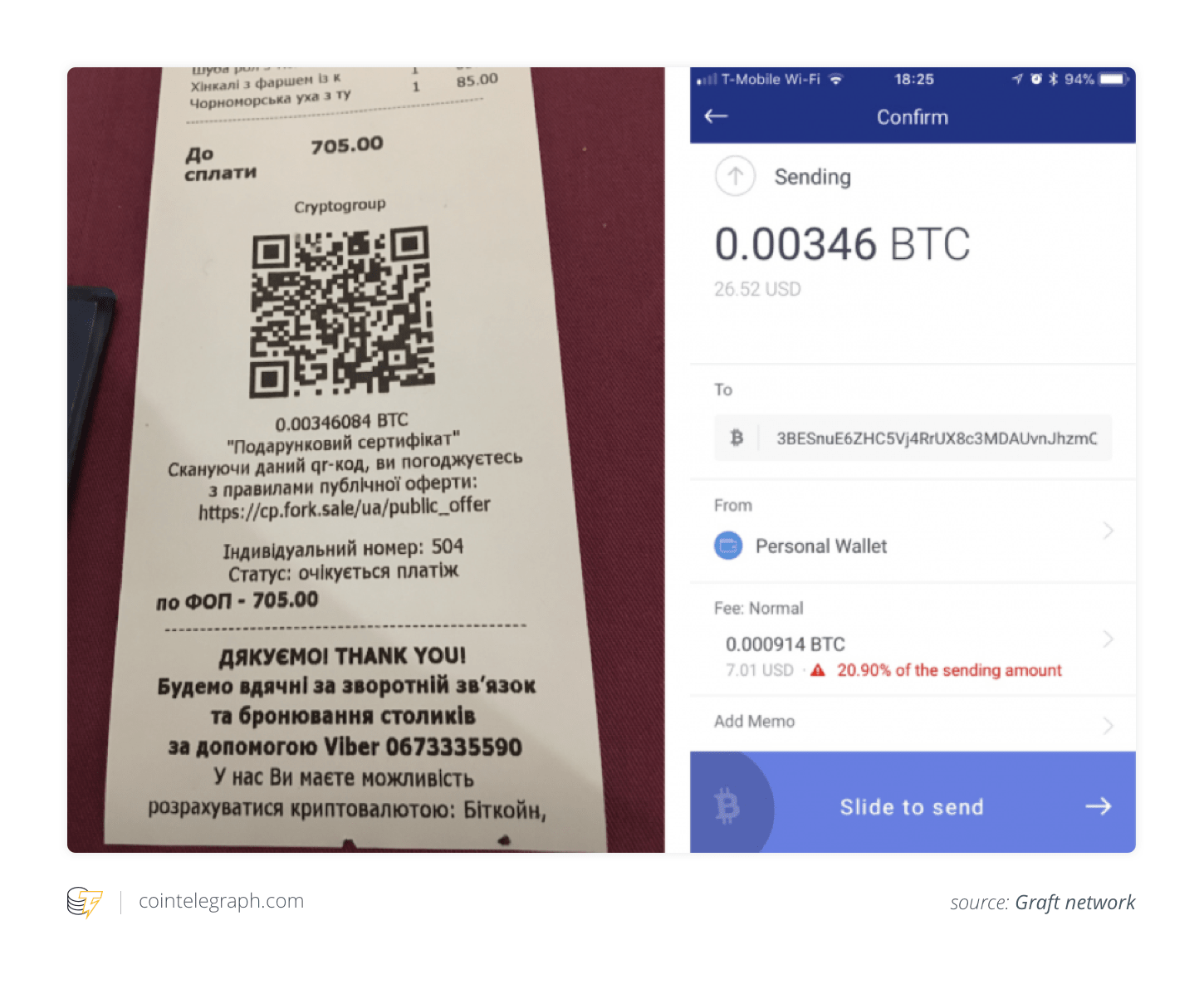 Good for promotion, but premature for large-scale use

Most often, Bitcoin is accepted by small local cafes or family restaurants. Many representatives of large chains are testing this feature in individual venues, but are not introducing it at a large scale. Some news regarding BTC acceptance can simply be attributed to PR campaign and a desire to make the headlines of the media amid the growing popularity of cryptocurrencies.

In many respects, the reasons for the slow development of cryptocurrencies in the food and beverage industry are related to regulatory issues and ambiguity around the legal status of digital money, as well as consumer distrust in a new form of payment.

Meanwhile, the prevalence of progressive Bitcoin-friendly cities like Arnhem, where locals pay with cryptocurrency as often as with bank cards, are indicative of a future cashless society.