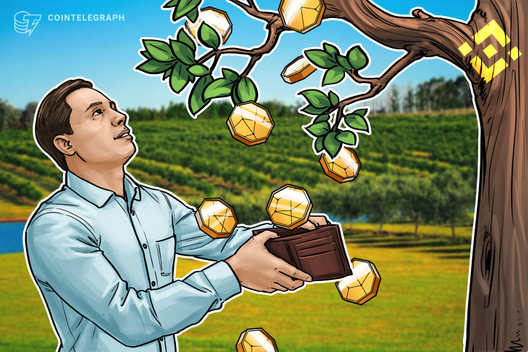 Major cryptocurrency exchange Binance has launched a dedicated staking platform, according to a company announcement published on Sept. 26.

The new service will enable Binance users to deposit their token holdings and earn staking rewards, but without having to set up their own nodes to fulfill minimum staking amounts and/or time lengths.

In blockchains that use a Proof-of-Stake (PoS) system — as opposed to Proof-of-Work (PoW) like in Bitcoin — nodes in the network engaged in validating blocks, rather than mining them.  A deterministic algorithm selects block validators based on the number of tokens a given node has staked in their wallet — i.e. deposited as collateral in order to compete to add the next block to the chain.

Staking holdings in a PoS network can yield significant percentage returns, depending on the size of the participant’s stake. This offers investors the chance to earn a form of “interest” on their holdings, as long as they are willing to lock up their funds to both maintain — and potentially profit from — a given blockchain network.

In its announcement, Binance has revealed plans to update its staking calculation methodology on Oct. 1, in order to establish what it deems to be a more accurate and fair distribution of the rewards. This will be achieved by providing multiple snapshots for user balances within a given day, rather than a single daily snapshot.

Not all cryptocurrency commentators perceive Binance’s launch of staking services as a positive moment for the industry.

A tweet from Binance CEO, Changpeng Zhao, emphasized to Binance users this morning that:

“You literally don’t have to do anything. Your funds on Binance automatically participate. You can still trade as you normally would.”

“I’m assuming the opportunity cost on staking/locking is flat lol if considering that it’s a complete GG. So most of them [token issuers] need to inflate massive amount (further dilute the value and further sell pressure down the road)”

As reported, Binance had apparently inadvertently earned staking rewards on its Stellar holdings this summer. Once it had discovered the profits, the exchange chose to launch support for staking the token as well as to distribute the already-accrued earnings among users.