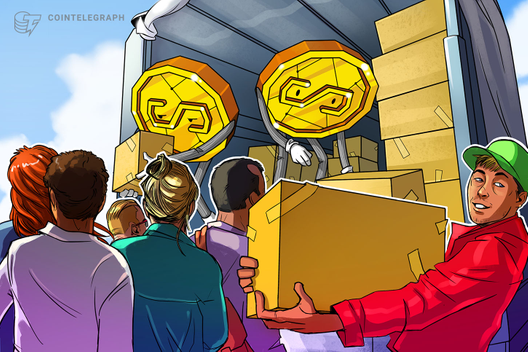 Following the first phase of the Unblocked Cash program in Vanuatu, Oxfam is readying to launch the pilot program’s second phase using the Dai stablecoin to distribute disaster relief.

Speaking exclusively to Cointelegraph, Oxfam Pacific Cash and Livelihoods lead and co-founder of partner company Sempo Nick Williams discussed the challenges and successes of the program’s first phase as well as the changes planned for the second pilot phase.

Throughout April and May of this year, Oxfam conducted the first phase of its Unblocked Cash program across two communities in Vanuatu. According to WorldRiskReport, Vanuatu is the world’s most at-risk nation to natural disasters, including cyclones, tsunamis and volcanic eruptions.

The Unblocked Cash utilized MakerDAO’s Dai stablecoin as a means of exchange among Vanuatu citizens, with the program intended to explore distributed ledger technology as a means of disbursing financial aid and facilitating the restoration of basic trade following a natural disaster.

The two trials saw 200 residents and 34 vendors from the Vanuatu villages of Pango and Mele Maat provided with tap-and-pay cards that were loaded with 4,000 Vanuatu vatu (roughly $50) worth of Dai. Both trials had about the same number of individuals and vendors participate in the pilot. However, the second trial took place in a more rural community than the first.

The initiative was conducted by Oxfam in partnership with Australian startup Sempo, MakerDAO and ConsenSys. The program was funded by the Australian Department of Foreign Affairs and Trade through its Australian NGO Cooperation Program.

Oxfam’s Sandra Hart described the goal of the program as going “beyond the existing banking infrastructure in order to get payments to people in a traceable way that also complaint, transparent, quick, and easy to use,” adding that the “vacuum of financial services in Vanuatu, and also in other places that have those same challenges” steered the pilot toward adoption of distributed ledger technology.

Williams stated that Sempo is “really excited about changes to the platform to create deeper financial inclusion in underbanked communities,” adding:

“It has been the promise of blockchain since the early days to create financial inclusivity for the underbanked, but the reality is that most efforts to date have basically failed to deliver on this. I think that a key reason for this is that everyone sits in their philosophical ivory towers and talks about the potential that blockchain has without actually getting on the ground and working communities.”

Hart and Williams detailed many of the financial barriers faced by ordinary Vanuatu citizens, with Williams describing the local financial system as being “fundamentally broken in many ways.” Williams stated that “the average cost for migrant workers to send money to their home communities was up to 20 percent,” describing the conditions as “borderline criminal.”

“We heard stories that the biggest advantage of the new plastic notes in Vanuatu is that it means people can bury them in the ground for longer without them rotting compared to paper banknotes.”

Hart adds that some Vanuatans living in remote communities hand-carry cash from other islands by boat because it is cheaper, noting that “they are also very happy about the polymer banknotes because if they drop them in the water they can retrieve them with no loss.”

Hart stated that for the trial of the first community during the pilot’s first phase, Oxfam was “still working out some processes over the course of the pilot.” She added:

“We learned quite quickly that even though vendors were quick to pick up the use of the smartphone app, we did need to provide them and some other members of the community like their grandchildren and their children […] with some additional help in terms of navigating their smartphone, for example refreshing their app, turning off and then back on, some basic things like that.”

To provide the technical assistance required by community members, Oxfam had an active team on the ground in addition to a phone hotline available to locals. Hart stated that most of the time, “the team on the ground was able to just show up, pop in, and address these issues with vendors” and added that the community indicated the locals “felt that we were immediately there and helpful” when called upon to provide technical support.

In the first trial, Oxfam tested different cash-out mechanisms to reimburse vendors for what they had been selling through the platform. Initially, Oxfam considered the possibility of Sempo paying out vendors using an international wire, but quickly found that the settlement times for international wire transactions in Vanuatu were extremely long.

The second cash-out method had Oxfam’s local office paying out vendors, and while Hart praised certain aspects of the process, the minimum processing time of two days for local transfers still rendered the method too slow. Hart also notes that the first two options explored were also “extremely expensive,” with the fees incurred making up a large percentage of the total sums that Oxfam was paying to vendors.

She stated that the model was more accessible for smaller vendors and allowed them to “replenish their stock and their liquidity within a shorter time-frame with someone that they knew and trusted that was in the same community.” Both Hart and Williams describe the super-vendor model as among the most impressive components of the program, with Hart stating:

“Even though we are still working on it, the super-vendor model was one of the things that solved a critical issue. It proved that you can leverage the trust that already exists with bigger vendors in the community. […] For me, that changes the game completely because it means that you can potentially harness the informal economy in a way that currently is not possible in cash-transfer programs, and is definitely not possible in voucher or social protection programs.”

Despite comprising larger vendors, the super-vendors “were not so big that they were divorced from the community dynamic,” with Hart noting that Oxfam was able to “use their level of literacy, liquidity, and business volume to get unbanked vendors involved in the program.”

According to Hart, the super-vendor model was not used in the second community due to most participating vendors operating at “roughly the same level,” meaning that “there was no distinctive vendor that seemed to have the liquidity or the capacity to be able to cash out others.”

After the completion of the first phase of Unblocked Cash, Hart noted considerable interest among Vanuatu citizens in continuing to use the payments infrastructure developed in the pilot for their daily financial needs. Hart said:

“There have been vendors asking us if they can keep the card and continue to use the system, we have been asked if we can set it up for the central market in the capital of Vanuatu, and people have even asked if there is the possibility of using the platform to pay for public transport.”

Commenting on the interest in maintaining the payment system, Hart stressed that the focus of the program is currently on disaster relief, though it is not limited to such.

Williams described meeting regulatory requirements as among the main challenges encountered during the Unblocked Cash pilot. Williams emphasized the need to adopt blockchain-based solutions to the regulatory requirements of local legal and financial institutions, adding that it is “critical to never underestimate the importance of regulation.” He went on, saying:

“One of the things that Sempo had to invest a lot of time into, was making sure that concerns of the Reserve Bank of Vanuatu and other entities were met, because, at the end of the day, they just want to protect against money laundering.”

Hart stated that Oxfam will continue with the Unblocked Cash program, which will comprise a “scaled pilot again in Vanuatu” and start in early 2020. She stated that Oxfam will begin the scoping process during 2019. The second phase will differ from the trials conducted during the first phase in a number of ways.

Firstly, the next pilot is expected to cover a greater number of local participants, approximately 1,000 direct recipients. Secondly, Oxfam plans to conduct the program on the island of Tanna in the south of Vanuatu, with Hart noting that “cash transfers have never been used” on the Island. Lastly, the second phase will also see Oxfam administer the program through “multiple stakeholders,” with Hart stating:

“Oxfam will be testing a model where we are using our civil society partners as direct administrators of the platform in order to confirm whether we can leverage our networks even if we are not physically in a location in order to deliver assistance in this way.”

Currently, humanitarian and development assistance is exclusively administered through large, nongovernmental organizations and agencies — with Hart attributing their predominance to the complexity and expense involved in facilitating cross-border payments.

The second phase will see Oxfam trial delegating much of the program’s administration to local stakeholders — such as community disaster and climate change committees, local churches, the Red Cross society and government officials. Hart expressed optimism regarding the trial’s potential to enable localized processes through which to execute disaster relief:

“As we continue to scale, we are looking at the possibility of using civil society partners and Oxfam’s ultra-local networks to deliver assistance in a way that has been built from the community up, […] in a way that really gives communities and small vendors a leading role.”

In Tanna, the local farmers’ support association — a network of cooperative farmers that sell fresh fruit and vegetables — is expected to make up a particularly critical stakeholder, playing the roles of both a vendor network and a direct distributor of fresh produce to targeted communities.

Williams revealed that Sempo is currently in the early stages of discussions on providing similar services to Tonga, describing the archipelago as “one of the most disaster-prone places on the planet, and has a high number of remittances.”

Despite his optimism regarding the potential for distributed ledger technology to facilitate greater financial inclusivity in certain jurisdictions, Williams expresses skepticism regarding the depiction of blockchain as a one-size-fits-all solution to economic exclusion, saying:

“The nature of financial inclusion or the lack there-of differs from location to location. Often you will hear projects hyped as the solution to financial inclusion everywhere, but I think that, as an example, somewhere in Australia this may not be as appropriate because we have quite a functioning banking system and digital payments platform, whereas that is not the place in somewhere like Tonga.”

Moving forward, Hart stated that Oxfam is viewing the second phase as the start of a larger scaling process that will see the platform employed in jurisdictions that are “remote and less connected to the formal financial infrastructure.”

Oxfam is currently reaching out to offices across more than 90 countries to gauge interest in testing the Unblocked Cash platform in other regions. The organization is also seeking to reach out to more donors in addition to the Australian Department of Foreign Affairs and Trade. Hart concluded that she is “confident in the achievements” of the program so far and excited to see the Unblocked Cash trialed globally.

“There have been ongoing discussions with NFAT [the New Zealand Department of Foreign Affairs and Trade], and we hope to pitch to other major donors like the EU and U.S.-based foundations and philanthropies that we work with.”