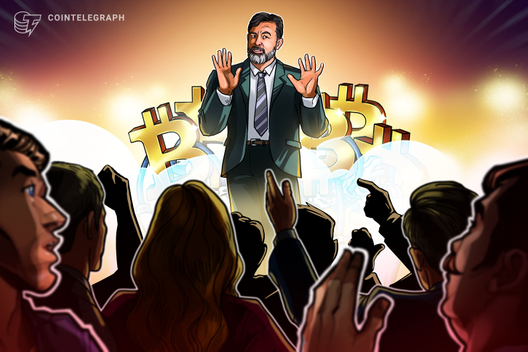 The CEO of Brazilian cryptocurrency firm Grupo Bitcoin Banco has claimed 25,000 Bitcoins (BTC) — a staggering $209 million as of press time — on a tax filing, while also saying his firm is unable to pay out customer funds as the result of a hack.

The tax document was shared with Cointelegraph by an individual close to Brazil’s tax authority, the Department of Federal Revenue (RFB), who asked to remain anonymous for security reasons. According to the document, the exchange’s CEO, Claudio Oliveira,claimed his crypto holdings in a 2018 filing with the RFB. Although the document is genuine, it is not possible to know if the numbers reported are accurate or the most current, due to tax filings in Brazil being self-reported. 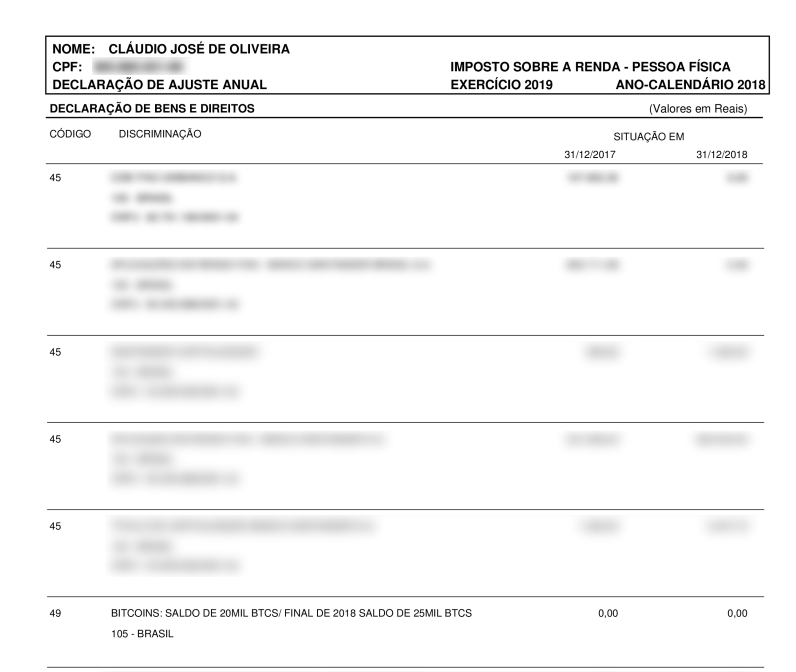 Despite the fact that the tax filing is for Oliveira’s personal funds, legal experts told Cointelegraph that Brazilian law could potentially demand the CEO’s personal assets to cover the firm’s debt. Oliveira’s Bitcoin is more likely to be seized if his company is found to have engaged in fraud and was not the victim of a hack, as the company’s representatives have stated.

Oliviera’s personal holdings are surfacing amid the company’s recent legal troubles and an ongoing police investigation into its activities.

In May, Grupo Bitcoin Banco claimed that it had become embroiled in a security breach that saw some customers double the balances of their accounts and withdraw money that did not exist, as Cointelegraph Brasil reported. The cost of the purported hack could amount to 50 million Brazilian reals ($13 million).

Although Grupo Bitcoin Banco has always maintained it was the victim of a hack, the firm has yet to offer any evidence in support of that claim. On June 6, a judge from the State of Paraná ordered the firm to provide evidence of the hack in its defense against a former client’s lawsuit. Grupo Bitcoin Banco never shared evidence of the hack with the court. On July 2 the firm settled with the former client for an undisclosed amount.

Starting in May, customers of all of Grupo Bitcoin Banco’s exchanges had their funds frozen, preventing withdrawals and trades. At that point, the firm became the subject of several lawsuits and legal actions.

In June, a judge at the Court of Justice of the State of Sao Paulo froze accounts associated with the firm amid both complaints from the exchange’s clients that they could not withdraw their funds and allegations of “abusive practices.” The clients claimed that they had a total of 726,630 reals (about $174,000) on the platform and urged the judge to seize the funds.

As of mid-August, over 20,000 clients had been affected, with Grupo Bitcoin Banco facing roughly 200 ongoing lawsuits, ranging in damages claimed from $3,000 to $3 million. Following searches of the company’s bank accounts, the court could not find money to reimburse the customers who had unsuccessfully tried to withdraw their invested funds. But at the time courts were not aware of Oliveira’s personal Bitcoin holdings. 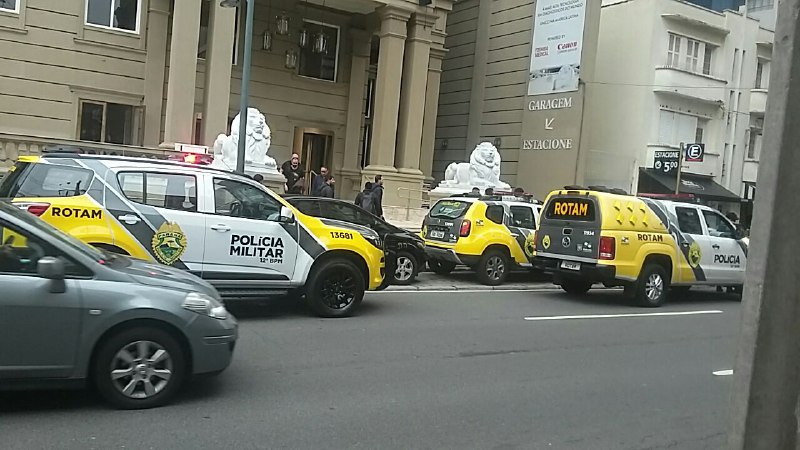 On Oliveira’s annual adjustment statement for the 2018 calendar year — filed with the RFB in 2019 — 25,000 Bitcoins are listed under the column for claiming goods and dues.

The tax document shows that Oliveira initially declared that he owned 20,000 Bitcoins, but later amended the amount to 25,000 Bitcoins.

However, Oliveira’s statement does not include an associated wallet address for the Bitcoin, making it impossible to verify both the actual existence of the BTC and potential transactions made with it.

The balance reported on the tax statement is personal and is not linked to Grupo Bitcoin Banco.

“Bitcoin is like a regular asset and it must be declared to the RFB with your properties and your other assets. BTC is like any other property, even if it’s not regulated.

“If he [Oliveira] were to sell some of his BTC without declaring it first, he would then have to explain where this fiat money came from. So, according to the annual tax declaration rules, he must declare his BTC if he has any.”

The tax filing also includes several cars, which were subject to a search-and-seizure warrant earlier this year, including a BMW X5, two Land Rover Sports, a Maserati Ghibli and a Mercedes Benz C300.

The document also notes shares in various companies as well as bonds, savings and real estate holdings of 14 different properties in various locations across Brazil.

What now? Legal experts weigh in

GBB argues that the private Bitcoin holdings of Oliveira are not in anyway related to the GBB’s Bitcoin holdings or the debts to its clients. In a statement to Cointelegraph, a GBB representative commented on the tax document, saying:

“It should be clarified that the data of a private individual are totally different from that of an individual that legally belongs to the group [Grupo Bitcoin Banco].”

However, local legal experts told Cointelegraph that Brazilian law could theoretically demand Oliveira’s personal assets — the most valuable of which is his reported BTC holdings — to cover Grupo Bitcoin Banco’s debt. There is precedent for seizing private assets in recent Brazilian history, most notably when former President Luiz Inácio Lula da Silva had his assets frozen during a sweeping corruption probe known as “Operation Car Wash.”

In another case more akin to the predicament with Grupo Bitcoin Banco, the assets of Eike Batista and his sons — totaling 1.6 billion Brazlian reals (about $385 million) — were frozen. Batista reportedly used a Panama-based company, The Adviser Investments, to manipulate markets, commit insider trading and conceal clients’ financial activity. A Rio de Janeiro judge had the Batista family’s assets seized for the duration of the criminal investigation.

Speaking with Cointelegraph, Novaes Neto explained the relationship between company debt and the owners of those companies:

“There is a distinction between the individual and the legal entity. In general, the owner is not charged with a company’s debt. But there is a legal provision that allows, in certain situations, to request the ‘disregard of legal personality’ and reach the partners of the company individually, as individuals. This happens in cases where there is abuse of legal personality, misuse of purpose, property confusion, among other things. In such cases, the judge may determine the extent of the charge to the private property of the partners or directors of the legal entity. This has become increasingly common in Brazilian law.”

Francisco Sandrin, a federal district public defender and professor of business law, told Cointelegraph that in cases of criminal fraud, a company’s debts may be transferred to the owners or directors of a company:

“Once the fraud is recognized, the judge may order the attachment of the partners’ assets to pay the company’s debts and vice versa.”

With the extent of Oliveira’s personal Bitcoin wealth now a matter of public record, it remains to be seen if he will be forced to use those funds to pay Grupo Bitcoin Banco’s debts. That all depends on whether judges determine if Grupo Bitcoin Banco was indeed hacked or if this has been a case of fraud all along.

Olivia Capozzalo and Kollen Post contributed to this report.