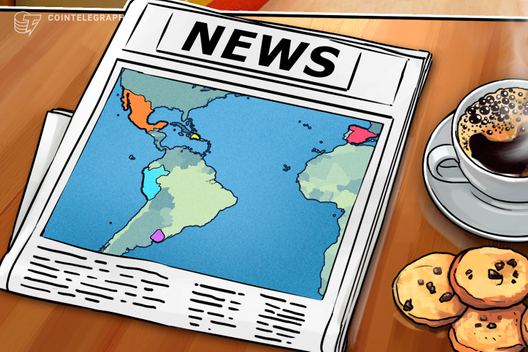 The Spanish-speaking world is seeing additional cryptocurrency and blockchain developments with the inauguration of a new blockchain campus at a Madrid university, a number of new allegations of crypto scams in the Dominican Republic, Mexico issuing professional certificates on blockchain and Æternity blockchain teaming up with the Digital Party of Uruguay.

Here is the past week of crypto and blockchain news in review, with original reporting from Cointelegraph en Español.

On Oct. 1, Cointelegraph en Español reported that a new blockchain campus was inaugurated at the headquarters of the Higher Technical School of Computer Engineers, of the Polytechnic University of Madrid. A spokesman for Informática El Corte Inglés (IECISA) said:

“The blockchain training is the commitment of the IECISA chair for this course, to respond to the needs of companies. […] The market demands the need for expert profiles in this technology, from which new applications and utilities are discovered every day in multiple sectors.”

Multiple people accused of crypto scams in the Dominican Republic

The Public Prosecutor’s Office of the Dominican Republic is prosecuting seven people who were allegedly involved in scams and money laundering with cryptocurrencies. Cointelegraph en Español wrote that the defendants scammed more than 111 people and stole over $500,000. It is unclear if the victims were all from the Dominican Republic or if some victims reside in other countries.

News broke on Oct. 1 that the Mexican Ministry of Public Education had begun issuing professional certificates through the use of blockchain technology. Juan Pablo Sosa Peña of the education ministry said that now, anywhere in the world, anyone with internet access can verify the authenticity of its professional certifications, adding:

“It really is a fairly safe technology, we are at the forefront of the world. The best universities in Paris and the United States use this technology.”

Cointelegraph reported in September that the Malaysian Ministry of Education has introduced a similar blockchain-based application to deal with the issue of certificate fraud.

As of Sept. 28, Peru is using blockchain technology to issue criminal, police, judicial, academic and work experience certificates for people under 29 who wish to enter the labor market. Cointelegraph en Español wrote that the Peruvian government has attempted to improve the lack of public trust in its services and is motivated to look at innovative technologies that can help them restore that trust. The official blockchain-based documents can reportedly now be verified for authenticity by anyone.

Decentralized application-focused blockchain Æternity formed a partnership with the Uruguay Digital Party to build a new system whereby citizens of Uruguay and members of the Digital Party can participate in a variety of political decisions in a transparent and decentralized manner.

The party plans to develop a secure and transparent database using a technological solution “for the collection and validation of adherent identities.” CEO of Æternity Americas Pablo Coirolo added:

“The application of democratic governance that will be implemented by the Digital Party is based on the internal governance solution that aeternity uses for internal community decision-making, which is a completely new architecture, allowing greater participation of citizens in political decisions at all levels, with unalterable reliability.”