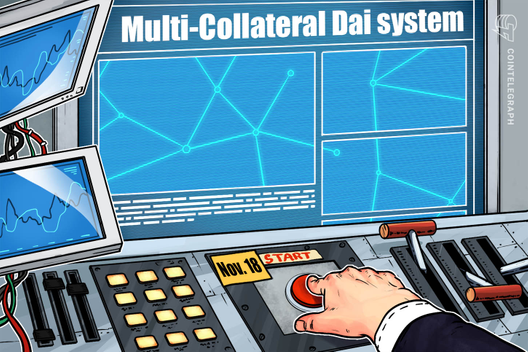 The Maker Foundation’s CEO reveals that its Multi-Collateral Dai system will be ready to launch on November 18.

Rune Christensen, the CEO of the Maker Foundation, has revealed that the Multi-Collateral Dai (MCD) system will be ready to launch on Nov. 18.

Speaking at Devcon 5 in Osaka, Japan, Christensen urged all holders of MakerDAO‘s MKR token to cast their votes on November 15.

MakerDao’s announcement points out two core features of the Maker protocol that will be heralded by its planned November launch: first, the Dai Savings Rate (DSR) — an MCD feature that allows DAI (DAI) stablecoin holders to lock their tokens in a smart contract to earn additional ones — as in a savings account.

MakerDAO claims that the launch of the MCD represents a major milestone, paving the way for the Maker protocol integration on the backend of Decentralized Finance applications.

In addition to reviewing and voting on the terms of the DSR, MKR holders will also be provided with documents to analyze the risk parameters for the two first tokens to be evaluated by MakerDAO’s interim risk team: Basic Attention Token (BAT) and Ether (ETH).

As Cointelegraph reported on Oct. 3, a HackerOne user disclosed a report revealing a critical bug in the planned MCD release. It was identified during the testing phase and before any users gained access to the system.

The bug could have reportedly allowed an attacker to steal all of the collateral stored in the MCD system — possibly via a single transaction. In return for the critical finding, the user was awarded a $50,000 bounty from MakerDAO’s bounty program.