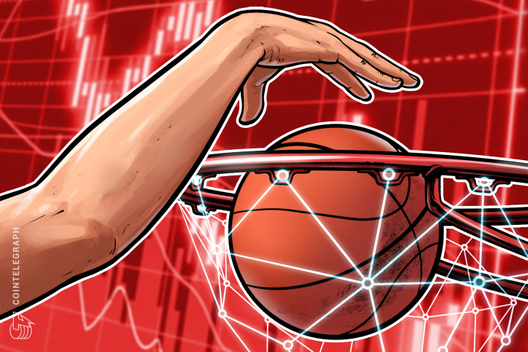 A now-viral post by a Chinese cryptocurrency trader has highlighted the stark drop in the price of American sneaker-backed tokens in the wake of the NBA-China fallout.

A now-viral post by a Chinese cryptocurrency trader has highlighted the stark drop in the price of American sneaker-backed tokens in the wake of the fallout between the NBA and China.

As Reuters reports on Oct. 16, the anonymous trader’s Weibo post from earlier this month had shone a spotlight on an apparent 10% crash in the price of crypto tokens backed by Nike’s Air Jordan sneakers on a United States-based exchange.

“It’s clear sneaker speculators were pulling money out of the market,” the trader told Reuters.

He interpreted the market response in the context of Chinese netizens’ anger over a now-notorious tweet from Houston Rockets general manager Daryl Morey, in which he declared solidarity with anti-government, anti-Beijing protesters in Hong Kong.

As the report notes, Morey — who swiftly deleted the controversial tweet — was accused of endorsing violence and touting a “secessionist pipe dream” by Chinese state media.

Reuters has calculated that the price of tokens backed by Air Jordan 1 Retro High Satin Black Toe sneakers — the latest in a line-up of exclusive and iconic sneakers sported by NBA stars — had fallen 34% since the Morey incident.

Reuters’ analysis is based on data from global digital asset exchange 55.com, which the report notes is used by Chinese traders, who — while being banned from trading on domestic platforms — exchange their yuan for Tether (USDT) via Alipay or WeChat to purchase tokens.

George Gao — reportedly as a sneaker brand influencer in China with over 38,000 YouTube followers — told Reuters that the anger of basketball fans in mainland China over the Morey controversy had been unprecedented.

The NBA’s Chinese market is reportedly estimated to be worth over $4 billion.

Hong Kong protesters gathered in support of Daryl Morey, according to an update on Oct. 16 from the Hong Kong Free Press.

Cryptocurrencies and the protest movement

As reported this summer, Hong Kong’s pro-democracy, anti-government protest movement has allegedly been spurring the wider adoption of cryptocurrencies such as Bitcoin (BTC), with some retailers in the city moving to introduce support for cryptocurrency payments.

Bitcoin trading volumes in Hong Kong soared in June amidst the turmoil. As of press time, the coin is trading at a roughly one hundred dollar premium on peer-to-peer exchange LocalBitcoins.

Morgan Creek Digital co-founder Anthony Pompliano proposed that in the aftermath of the hardline response to Hongkongers’ protests on the Chinese state’s anniversary — Bitcoin’s non-seizability has become “very attractive” for those whose civil liberties are under threat.