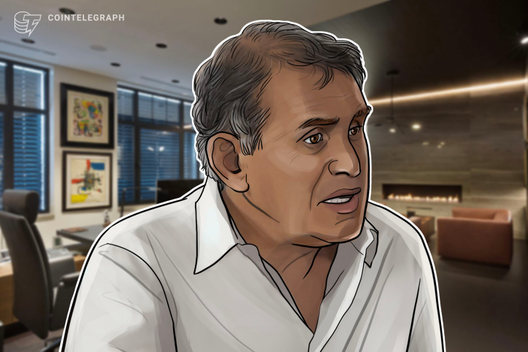 Economist Nouriel Roubini has admitted that Bitcoin “maybe is a partial store of value” while leveling his usual criticisms against cryptocurrencies.

Economist Nouriel Roubini — also known as “Dr. Doom” for his prediction of the 2007-2008 financial crisis and a notorious critic of cryptocurrencies — has conceded that Bitcoin (BTC) is “a partial store of value.”

Roubini made the concession during a panel together with a host of high-profile crypto industry figures such as Brock Pierce, Bobby Lee and Tone Vays — during the CC Forum 2019 conference in London on Oct. 16.

“Maybe Bitcoin is a partial store of value”

As Tone Vays suggested in a tweet on Oct. 17, Roubini’s admission arguably represents “baby steps” forward in his stance towards cryptocurrencies — notwithstanding the fact that Roubini swiftly followed his comment with a suite of criticisms:

“Maybe Bitcoin is a partial store of value but it’s not a unit of account, it’s not a means of payment, it’s not scalable […] in spite of its rally earlier this year, it’s lost 60% in value since it’s peak, so I don’t see it going anywhere frankly.”

“I’d take the U.S. dollar over any one of your s***coins,” he told BTCC founder Bobby Lee, arguing that financial innovation, albeit imminent, would instead come from implementations of AI, Big Data and IoT technologies in the fintech space.

Roubini noted that as an analyst of financial crises, he is “not a defender of the traditional financial system.” He nonetheless forcefully argued that central banks’ responses to 2008 — i.e. coordinated monetary policy and the Fed assuming the role of “lender of last resort” — had worked and prevented the Great Recession from becoming “a Great Depression 2.0.”

Tokenization returns us to the “Stone Age” of barter economies

Roubini made the further argument that tokenizing assets, as proposed by some blockchain advocates, would return us to a “Stone Age of bartering,” as it would inhibit a measure of the relative price of goods:

“‘Even the Flintstones had a more sophisticated system of value than crypto.”

The economist’s bleak assessment of cryptocurrencies chimed with his starkly pessimistic outlook on the macroeconomic landscape, in which he emphasized the risks of a cold trade war between the U.S. and China spurring a balkanization and de-globalization of the world economy, a possible hard Brexit sparking a Eurozone recession, and a potential hike in oil prices due to rising geopolitical tensions in the Middle East.

More broadly, he claimed, we are seeing something of “a populist backlash” against frictionless trade, migration, and even against technology as it becomes increasingly capital-intensive and labor-saving.

During the panel, Roubini reiterated many of his by now well-known remarks on cryptocurrency — i.e. that international governments will categorically quash any value transfer system that is truly anonymous, and that decentralization in crypto is a myth.