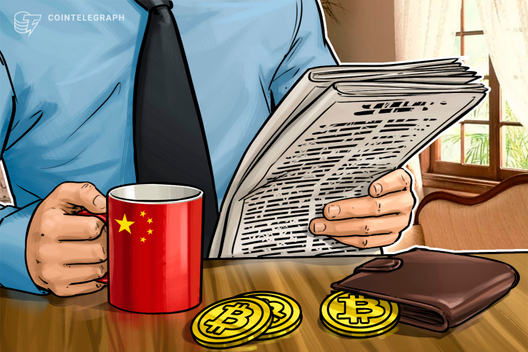 As excitement continues around the country’s sudden endorsement of blockchain, the local press reportedly seeks to dampen hopes of a reversal of its crypto ban.

China should embrace blockchain technology but not “speculate” about cryptocurrencies such as Bitcoin (BTC), state media claim.

State newspaper: “We must remain rational”

As Reuters reported on Oct. 29 quoting local news outlet the People’s Daily, Beijing’s previously-announced support for blockchain should not be read as support for crypto.

The People’s Daily is a publication under the direct control of the ruling political power, the Communist Party of China.

“Blockchain’s future is here but we must remain rational,” it wrote. The publication continued:

The veiled warning comes days after Chinese president, Xi Jinping, publicly pledged to make the country the world’s number one blockchain environment in a speech.

His words came along with China signing a new so-called “crypto law” governing various aspects of blockchain technology, to enter into force in January.

Many suggested the events triggered a major surge in the Bitcoin price, which on Friday expanded from $7,400 to local highs around $10,500.

Cryptocurrency trading is wholly banned in China, however, with Xi not mentioning anything which could suggest a change in policy.

Nonetheless, the mood around Bitcoin still remains buoyant, with the weekend’s gains enduring to see BTC/USD still up 28%.