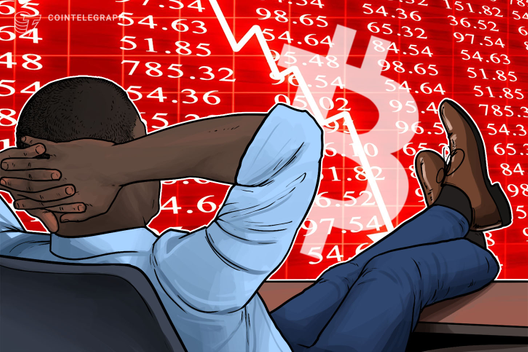 Markets defend the critical Bitcoin price level after BTC/USD extends a week of rapid losses, which at one point totaled almost 25%.

Bitcoin (BTC) dropped to within $15 of $6,500 on Nov. 25 after another day of significant losses obliterated previous support levels.

Data from Coin360 shows BTC/USD bouncing off the significant $6,500 barrier, having fallen 7% in the past 24 hours.

The cryptocurrency’s weekly downturn currently stands at more than 20% versus the same point last week, while monthly, investors have taken a 30% hit on holdings.

As Cointelegraph reported, current moves are essential in deciding whether bulls have a chance of preserving influence. If not, little remains in the way of Bitcoin dropping as low as $2,500.

Commentators will be keenly eyeing $6,500 in particular, as this figure represents the assumed cut-off point for miner profitability. Previously, analysts had claimed miners would defend that price should Bitcoin fall within its range.

At press time, that theory appeared to hold, with an upwards reversal taking Bitcoin to $6,700.

“Whatever movements there are now (whether we go back to $7,800 prior to any further downwards movements), I do believe that the asset $BTC is one of the few bullish assets macro wise for the coming years,” he said in his latest Twitter update late on Sunday.

Van de Poppe added he would remain satisfied if markets bottomed in the low $6,000 range.

Short-term performance could also improve thanks to a “gap” in CME Group’s Bitcoin futures. As noted, when futures begin trading at a different price to that at which they closed their previous session, Bitcoin tends to “fill in” the resulting vacuum later. That blank spot currently sits at around $7,300.

Altcoin markets predictably suffered as a result of Bitcoin’s weakness. As the week began, most cryptocurrencies in the top twenty by market cap shed almost 10%.

Others, such as Litecoin (LTC), managed to stave off the worst of the bearish sentiment to deliver more moderate losses of around 5%.

The overall cryptocurrency market cap also erased a significant chunk of its value, falling to just $183 billion at press time with Bitcoin’s share at 66.2%.