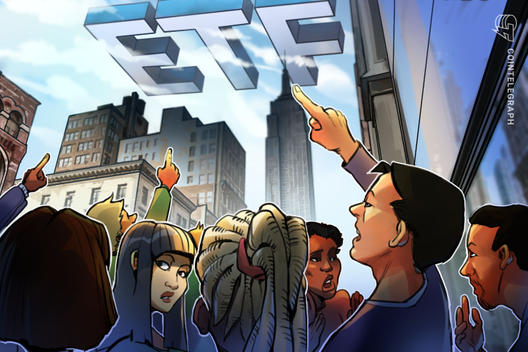 An application for a blockchain-focused ETF has been filed with China’s securities regulator, according to a disclosure from the China Securities Regulatory Commission.

An application for a blockchain-focused exchange-traded-fund (ETF) has been filed with China’s securities regulator, according to a disclosure from the China Securities Regulatory Commission.

The proposal, filed on Dec. 24 by Shenzhen-based asset manager Penghua Fund, is for an ETF that would track the performance of a basket of publicly-listed stocks from businesses in the blockchain sector.

If approved, the fund would be China’s first blockchain-themed ETF, according to a Dec. 26 news release from the state-run Shanghai Securities Journal (SSJ).

On the same day that Penghua Fund’s proposal was submitted, the Shenzhen Stock Exchange announced its “Blockchain 50 Index.”

The index is composed of the top 50 Shenzhen-listed blockchain firms by market capitalization. The list reportedly includes Ping An Bank, Midea Group and Zixin Pharmaceutical, among others.

As SSJ notes, the firms in the new index reflect a broad cross-section of the industry, with specializations that include hardware development, technology and services, and blockchain applications.

According to SSJ’s report, analysts believe that if Penghua Fund’s proposal proves successful, a host of other asset managers are likely to follow suit with their own fund proposals.

Even as the blockchain sector remains in its infancy, SSJ notes that a deepening of policy guidance and a rising number of mature firms in the industry could see the popularity of domestic blockchain-themed ETFs soar.

In an interview with SSJ, an unnamed fund manager from a Beijing-based firm noted that many investors still lack orientation when it comes to investing in the blockchain industry.

By reflecting a diversified basket of assets, ETFs could provide them with a convenient investment channel and offer the opportunity to pocket dividends as the sector develops further.

Everbright Prudential Fund Manager Dong Weiwei told the SSJ that as a distributed and highly secure technology, blockchain has wide-ranging cross-industry potential. He singled out its potential to innovate digital finance, Internet of Things technology, intelligent manufacturing, supply chain management, and digital assets, among other areas.

Pro-blockchain, but not private cryptocurrencies

As reported, the United States’ securities regulator, the Securities and Exchange Commission, has spent the past couple of years deferring its own rulings on a series of cryptocurrency-focused ETF proposals.

Beijing continues to toe a firm anti-cryptocurrency line, in marked contrast to its bullish stance toward its underlying blockchain technology. 2019 saw a watershed endorsement of blockchain from President Xi Jinping.

The People’s Bank of China is meanwhile expected to be the first central bank of a leading global economy to roll out a central bank digital currency. The institution has taken pains to emphasize the digital yuan’s distinction from Bitcoin (BTC), stablecoins, and other private digital assets.