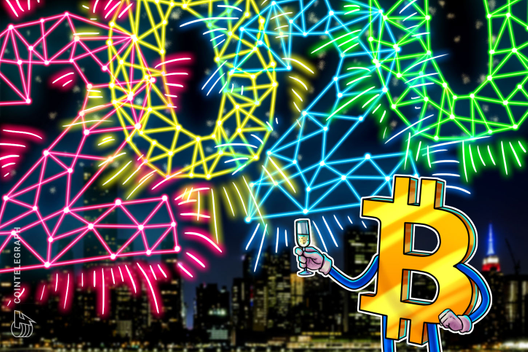 Imagine that Bitcoin made itself some promises for the upcoming year — what would they be like?

Most of us believe in the “New Year — New Me” rhetoric: I’m going to lose weight, quit smoking, eat healthy, stop being lazy, spend more time with family and whatnot. Yet, losing weight usually only turns into losing motivation instead.

But then, it doesn’t really make sense to laugh at our absurdities, as we humans have plenty of them. Not when it comes to New Year’s resolutions, at least. I mean, we can mostly agree that it’s just a hefty to-do list for the first week of January.

Now, what if it were the same for the disruptive and revolutionizing technology of blockchain? Does it hold the same stereotypes as us humans when it comes to New Year’s resolutions?

The United States Federal Reserve promises a more stable economy for its New Year’s resolution (did I just hear bailout?) by printing $425 billion by the middle of January 2020. Alongside an ever-increasing national debt, currently almost $24 trillion, this is another example of the Fed’s inept ability to manage the economy. Enter blockchain — the backbone of Bitcoin and other digital assets — which resolved to tackle double-spending; remove intermediaries and control from centralized powers; enable automatic, immutable and transparent transactions on peer-to-peer networks; and disrupt (while helping) financial institutions — and the list goes on.

Yet, despite all of this, the journey of Bitcoin (and of course blockchain) has been quite exciting, from exploding onto the scene and mining billions of dollars worth of coins to an implosion that wiped out at least 80% of the market’s value. Presently, not just Bitcoin but blockchain technology as a whole is expected to generate an increase in business value of more than $176 billion by the year 2025 and exceed $3.1 trillion by 2030. Blockchain’s unprecedented value will disrupt most of our industries in the coming years, if not all of them.

Does it sound like a fleeting dream like other New Year’s resolutions that are bound to fail? To get a better idea, let’s look at blockchain’s track record in this context.

People keep saying that “Bitcoin is dead,” but this sounds like disenchanted haters with one too many failed New Year’s resolutions under their belt to me. Despite the volatility of its price last year, it still trades better than leading companies like McDonald’s, with a market cap of $170 billion. Also, the estimated number of global Bitcoin users is around 25 million, of which 5% are Americans. And the best part? Every time Bitcoin’s value goes down, it shoots back up. Now, as 2019 comes to an end, a single BTC is over $7,000.

If two is company and three is crowd, traditional payment systems are as chaotic as coastal Thailand fish markets. Considering the number of middlemen, it’s a typical case of “too many cooks spoil the broth.” A genuine decentralized peer-to-peer payment system is the fundamental resolution that blockchain (starting with Bitcoin) fulfilled, with no person or institution being “in charge” of Bitcoin transactions.

Not being a quitter and keeping its New Year’s resolution promise, blockchain is disrupting supply chain management through permanent, seamless documentation in a thoroughly decentralized and transparent manner. From creating P2P and more secure data storage networks to verifying data in insurance contracts, the applications of the technology in various industries are limitless.

Back in 2018, Bitcoin was often bullied for not being “approved.” By the end of the year, fed up, Bitcoin (and blockchain as a whole) resolved to make institutional friends. And now, at the end of 2019, we must say that it’s been quite successful. Players like Yale University’s $30 million endowment fund, Square’s Cash App and Fidelity Investments — which provides financial services for $7.2 trillion in assets — have all joined the Bitcoin club. And, the Holy Grail of institutional adoption finally bestowed itself upon us when Bitcoin futures exchange Bakkt launched with full governmental approval.

While China has already banned crypto exchanges (but is now launching its own central bank digital currency) the U.S. government has tried shutting Bitcoin down in the past as well. The financial crisis gave bankers a worse reputation than they already had, but the blame also lies with the institutions that oversee and facilitate effective, timely and trustworthy asset transfers.

Using blockchain for mainstream payments eliminates fees that generate huge revenues for the banking industry. It’s pretty obvious that some are trying hard to obstruct blockchain going mainstream, so the resolution for institutional adoption is on a slow but steady push.

What’s the difference between humans and blockchain? Humans promise to stick to their New Year’s resolutions, doing away with their habit of procrastination — but in all reality, they end up just procrastinating not to procrastinate. Not Bitcoin, mind you. The Bitcoin network has witnessed a hash rate increase by 60% in 2018, which not only indicates enhanced investment in critical infrastructure, but also a greater degree of predictability and security for the network. A growing hash rate is a sign of a healthy network, and this increase can be attributed to the mining behemoths that entered the space while bringing a greater number of devices online to offer network security.

This also helps with blockchain’s resolution to achieve optimum scalability, which its currently still working on diligently.

When the going gets tough, the tough get going. Nobody likes quitters, so while blockchain shuttered to “fully” accomplish one of its resolutions, it has continued on like the little engine that could with a glorious attitude and a scope for redemption. Despite being labeled as “utmost secure,” several hacks have occurred on major crypto exchanges. Over $927 million was stolen by hackers in early 2018 alone from various platforms and cryptocurrency exchanges — all using public blockchains to some capacity.

Though blockchain had some major setbacks with this New Year’s resolution, it never quit. It has constantly been working on new strategies and methods such as regulation, better custody, insurance to fully back assets held and new funding methods like security token offerings and initial exchange offerings.

Over 58% of investors and 55% of consumers feel positive about blockchain’s potential to handle value transfers, monetary or otherwise. For the majority, blockchain is an emerging technology that is truly capable of transforming a multitude of business processes — much like the internet did.

However, according to a Deloitte survey, we still have 18% of the participants for whom blockchain is simply a database to record financial transactions. With organizations increasingly realizing the scope for blockchain implementation, the new year will probably witness a surge in blockchain adoption by businesses small, medium and large.

Bitcoin makes more money doing nothing than you did all week at work. Accept it. Yet, a major roadblock to the wider adoption of blockchain technology was the low interoperability of its applications.

Currently, blockchain innovators are working on new, viable ways of establishing secure connections between different ledgers. With these, blockchain aims to significantly improve interoperability between the financial institutions.

A major aspect of blockchain’s 2020 vision is to rise above the bad reputation of “not being secure.” For the new year, blockchain aims for better smart contract execution, enhanced data privacy and even advanced analytics with the help of artificial intelligence and machine learning. This will improve overall network monitoring and the ability to troubleshoot on-chain events.

Blockchain as a Service

Blockchains’ New Year’s resolutions aren’t purely selfish. In fact, whatever it works on always has something to do with the betterment of existing industries. At times, it even ushers in the possibility of new industries like Blockchain as a Service. Smart enterprises such as Microsoft and Amazon are already working on BaaS integration. Maybe this is part of their New Year’s resolutions as well.

All that being said, blockchain technology indeed has a 2020 vision for the coming year. If you really paid attention while reading, then you noticed that blockchain has pretty much been crushing its resolutions year after year. You might be feeling a bit insecure about your own resolutions right now.

But still, to end on an honest note, there’s more work to be done. Above all, blockchain needs time, and we must be patient. Remember, the internet didn’t become what it is in a day.

J.D. Salbego, the CEO of Legion Ventures, is a global leader in blockchain and digital securities with a history of working with industry-leading startups, crypto funds, institutions and governments to drive blockchain innovation, STOs/ICOs, crypto capital markets, international expansion, digital asset fund strategy and go-to-market frameworks. His work has been featured in Forbes, Business Insider and Yahoo. As a market influencer, speaker, published author and internationally recognized subject matter expert, Salbego is frequently invited to speak at leading conferences like the World Economic Forum, BlockShow and Delta Summit.