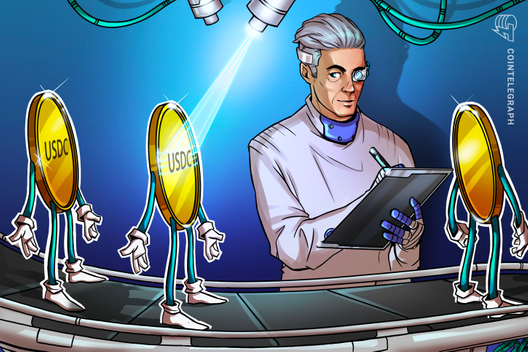 Touted as “the world’s fastest-growing stablecoin,” USDC saw listing today on crypto exchange Kraken, per a press release provided to Cointelegraph on Jan. 8.

USDC developed by Circle and Coinbase

An Ethereum-based (ERC-20) token, USDC is a cryptocurrency pegged to the U.S. dollar, allowing traders and investors to park their money in a stable and transferable digital asset if need be.

The past two years have seen an influx of additional stablecoins into the crypto space, including USDC, after regulatory and insolvency fears flooded the market surrounding legacy stablecoin Tether (USDT).

Circle and Coinbase list USDC on Kraken, a competitor

Founded in 2011, Kraken is one of the oldest exchanges in the crypto space. Kraken’s position as a natural competitor to Coinbase, founded in 2012, might lead the public to question Kraken’s listing of USDC, a product connected to Coinbase.

Coinbase and Kraken are two of the largest spot exchanges in the crypto space, with Coinbase’s Pro platform ranking 3rd and Kraken ranking 4th on CoinGecko’s list of the top 100 crypto exchanges by volume — making them the largest two operating in the United States.

Cointelegraph reached out to Circle but received no response as of press time. This article will be updated accordingly upon receipt of a response.

Additionally, Whale Alert, a Twitter account dedicated to tweeting about large cryptocurrency movements, notified the public of a minting of USDC valued at more than $1.4 million on Jan. 8.