The largest cryptocurrency sees heavy downward pressure since hitting in excess of $8,400, with a CME futures gap providing reliable support.

Bitcoin (BTC) continued falling on Jan. 10 as gains from late last week fizzled and markets attempted to find support levels in the $7,000-$8,000 range.

Data from Coin360 and Cointelegraph Markets showed BTC/USD shedding another 2% overnight on Thursday, having previously reached local highs above $8,400.

At press time, the pair circled just under $7,750 in volatile conditions, having paused its losses after hitting a “gap” in CME’s futures market between $7,676 and $7,716. CME’s price index itself just avoided entering the gap zone.

As Cointelegraph reported quoting regular contributor, Michaël van de Poppe, Bitcoin was likely to drop down to the gap, which represents the “empty space” between where one futures trading session closes and the next opens.

Historically, the price has sought to “fill” previous CME gaps with consistent regularity. The latest scenario is nonetheless rare, coming after 12 consecutive red candles on the 4-hour chart. 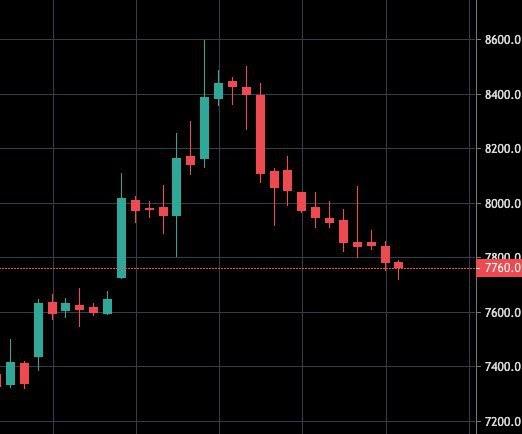 In a fresh update, Van de Poppe remained consistent about the short-term outlook, warning that downside action could take Bitcoin as low as the previous bottom at around $6,400. He summarized:

Others appeared taken aback by last week’s sudden improvement. Among them was Peter Brandt, the veteran trader well known for previously calling some of Bitcoin’s biggest moves.

Having warned BTC/USD could slip to $5,500 by July 2020, an apparent nuance saw Brandt give credence to the idea a Bitcoin bull market may have begun. In addition to technical signs, however, this depended on the absence of investors he called “cryptocultists.”

A noticeable exception to the downtrend was Cosmos (ATOM), which gained 5.1% on the news of its impending listing on cryptocurrency exchange Coinbase Pro.

The overall cryptocurrency market cap was $205.5 billion, with Bitcoin’s share at 68.5%.