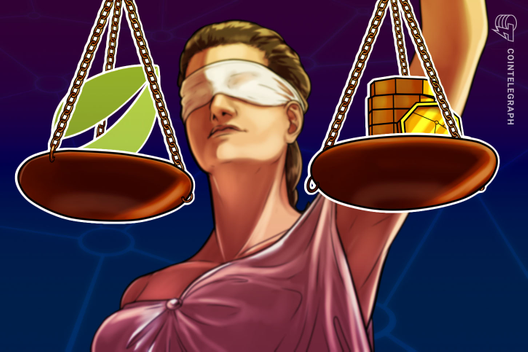 A class-action lawsuit against Bitfinex and Tether was refiled in New York on Jan. 8, just one day before a similar filing by another plaintiff.

An Oct. 10 class-action lawsuit filed against iFinex Inc., the parent company of Bitfinex and Tether, was refiled on Jan. 8 in New York’s Southern District. The lawsuit by Young et al. was followed on the next day by a similar class-action filing by Bryan Faubus.

The original lawsuit alleges that iFinex manipulated the cryptocurrency market in 2017 by issuing unbacked Tether (USDT) that was then sold for Bitcoin to increase its price. Plaintiffs argue that the common belief that each USDT represented one real dollar led traders to eagerly participate in the market, boosting it by an excessive amount that later led to the 2018 bear market.

Representatives from Bitfinex had earlier refused the allegations in their entirety, attempting to dismiss the class-action suit outright.

The original lawsuit by Eric Young and Adam Kurtz was filed in Washington State’s Western District and was terminated on Jan. 7 according to court documents obtained by Cointelegraph.

The new, refiled lawsuit was submitted on Jan. 8 to New York’s Southern District with the addition of a third plaintiff, David Crystal.

Court documents show that just one day later on Jan. 9, a lawsuit was filed by Bryan Faubus, a self-identified Bitcoin trader. The case files were submitted to the same Southern District and directly cite the Jan. 8 class action filed by Young.

Text comparison tools show that the two filings are virtually identical, though some parts in Faubus’s are different in that they refer to Young’s class action.

It is unclear what relationship, if any, the two plaintiffs have to each other. Cointelegraph reached out to the attorneys listed in both filings for clarification, but had not received a response as of press time. This article will be updated with more information as it comes in.

It is also unclear why the original class action was refiled in New York, though it would make sense given iFinex’s New York incorporation. Possible motivations may have to do with the Southern District courts’ previous indictment of Crypto Capital Corp., a former business partner of iFinex, as well as the district’s general reputation for strictness in financial litigation.

In addition, the New York Attorney General is currently investigating the company for alleged mismanagement of Tether reserve funds.