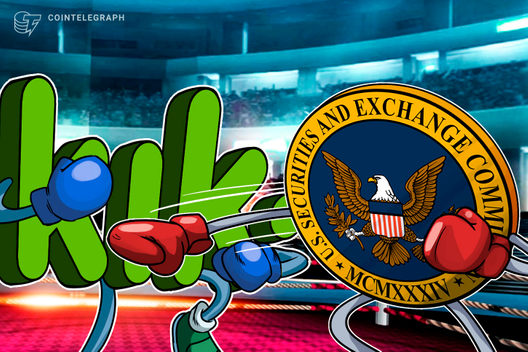 New documents reveal Kik is pushing to set a trial date for its SEC lawsuit, which may be scheduled for some time in the second half of 2020.

Kik Interactive Inc. requested the formal definition of a trial date for its lawsuit with the United States Securities and Exchange Commission (SEC), as revealed by a Jan. 9 court document. The company was charged by the SEC in June 2019 for conducting an unregistered security issuance with its $100 million initial coin offering (ICO).

Kik Interactive is the Canadian developer of the Kik messenger app. It launched a successful ICO in 2017, releasing the Kin token. Though it was presented as a utility token for accessing some features of the Kik messenger, the SEC placed the company under scrutiny since early 2019.

The regulatory pressure caused Kik to significantly downsize its operations in September 2019 to focus on the legal battle. CEO Ted Livingstone pledged to fight the SEC until it “didn’t have a dollar left,” though this became unnecessary following a buyout by MediaLab.

Kik remains defiant in the face of overwhelming odds, arguing that the commission does not have strong evidence to support their claims. Livingstone had expressed his desire to go to trial as soon as possible, setting May 2020 as a possible target.

However, new documents show that this may be an unattainable goal. In response to a Nov. 26 court order, the two parties agreed on a roadmap in preparation for the trial which is set to be completed in June 2020.

Additionally, the documents reveal that Kik is objecting to a deposition sought by the SEC, which may further delay plans:

“The parties plan to present a joint letter brief to the Court on the Rule 30(b)(6) issue within a week, and […] the parties will attempt to schedule this deposition, along with the other two depositions, by the above-proposed fact discovery deadline of January 28, 2020. If the parties are unable to meet this deadline, they will request further relief from the Court regarding the case schedule as appropriate.”

Despite this, Kik requested the court to set a specific trial date. The SEC holds a neutral position on the matter, meaning that the decision is entirely up to the court itself.

This may occur at the status conference scheduled for Jan. 14, a pre-trial hearing where judges revise the preparatory activities and can set up a tentative trial date.