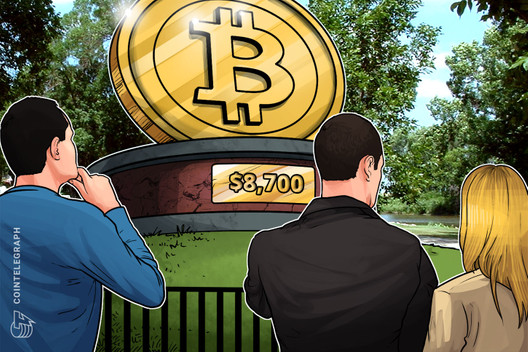 Dramatic bullish action in the first two weeks of 2020 buoys traders, who identified Bitcoin’s 200-day moving average as the next major resistance zone.

Bitcoin (BTC) calmed its bullish growth after a week of gains on Jan. 15, settling just below its highest levels in two months.

Data from Coin360 and Cointelegraph Markets showed BTC/USD hitting local highs of $8,885 on Tuesday, before a slight retracement an area around $8,700.

The repositioning caps a frenetic few days for the largest cryptocurrency, which cemented weekly gains of over 12% in just five days.

For regular Cointelegraph contributor filbfilb, the current range was suitable for the price to “cool off,” nearing Bitcoin’s 200-day moving average (MA).

“It would make sense to, been quite a ride and close to 200ma,” he told subscribers of his Telegram channel.

Previously, fellow trader Tone Vays had highlighted the 200MA as a likely cause of Bitcoin’s bull run ceasing in the short term.

On the back of a surge in Bitcoin futures and associated options trading which Cointelegraph reported on this week, overall Bitcoin trading volumes were also up, reaching their biggest daily since late October.

In an update to his twelve-month Bitcoin price forecast, filbfilb confirmed his theory that BTC/USD was nearing the end of a reaccumulation phase, with upside more likely to characterize the coming months.

As Cointelegraph noted, others remained wary, with analyst Keith Wareing not discounting the possibility of a fresh annual low coming before Bitcoin’s block reward halving in May.

The former even usurped the latter’s market cap ranking on Tuesday to claim the title of fourth-largest cryptocurrency. On the back of 81% gains in the past 24 hours, multiple theories continued to circulate on social media over the rise of BSV and its dependence on proponents Craig Wright and Calvin Ayre.

BCH also made gains, up 17% over the same period, while the majority of major altcoins saw growth of between 8% and 13% on the day.

The overall cryptocurrency market cap was $238.9 billion, of which Bitcoin’s share was 66.1%.