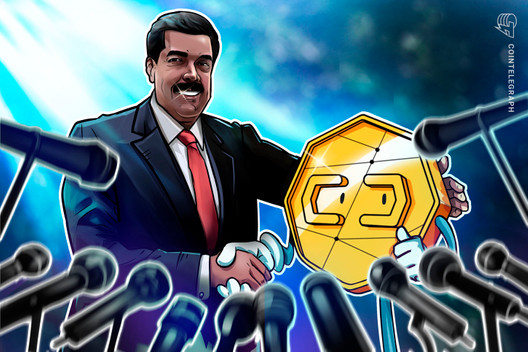 The president of Venezuela, Nicolas Maduro, has announced that the state-owned PDVSA oil firm will sell 4.5 million barrels of oil for Petros.

Venezuela will soon sell oil from reserves of a state-run oil and gas company for its national oil-pegged cryptocurrency, the Petro (PTR).

Venezuelan President Nicolas Maduro has signed a decree to sell 4.5 million barrels of oil from the certified 30 million-barrel reserve maintained by Petroleum of Venezuela (PDVSA), the state-owned company officially announced on Jan. 14.

According to PDVSA, Maduro announced the news in a speech before the Constituent National Assembly — an assembly elected in 2017 to draft a new constitution for Venezuela.

Oil sales to be an exploration mechanism

Once the initial sale of 4.5 million barrels is completed, the firm will sell 50,000 barrels per day, denominated in Petros, as an “exploration mechanism” for the oil-backed stablecoin. Maduro said that the trial will be vital for the consolidation of Petro, stating:

“We are preparing for the second phase that will allow more efficient use of cryptocurrency.”

Moreover, Maduro also decreed that all airplane fuel used for covering international routes should be sold for Petros. The president reportedly said that this scheme will allow Venezuela to “open roads to the new economy” and build a world of “peace and integration of peoples, their happiness and improvement.”

Maduro said that the Petro will be an important tool for the country’s fight against the mafia.  Maibort Petit, a Venezuelan writer and journalist, quoted Maduro:

“A lot of people don’t want to switch to the Petro because they have their business in dollars. Mafia and other thieves don’t like the cryptocurrency because it cuts off their hands.”

Some commentators have taken to Twitter to oppose Maduro’s plan, claiming that the Petro is a “robbery disguised under 4.5 million barrels.” Some argued that selling oil from the country’s national reserves violates the constitution of Venezuela.

As reported by Cointelegraph in November 2019, Maduro purportedly cut the Petro’s backing from five billion barrels of oil to 30 million. The sharp decline was allegedly a result of United States sanctions on PDVSA.

Launched in February 2018, the Petro became the world’s first national oil-baked cryptocurrency. In late 2019, Maduro ordered that Venezuelan retirees and pensioners should get their Christmas bonus in the Petro. Despite Maduro ordering Banco de Venezuela to start accepting PTR in July 2019, the Petro is purportedly still not used in the country.