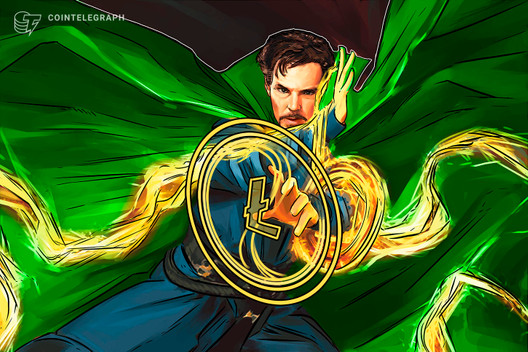 Litecoin price (LTC) led the crypto market with a 20% daily gain, leading traders to wonder if a triple-digit rally is in the making just like a year ago.

On Jan. 30 Litecoin (LTC) lit up the charts in both it’s USD and Bitcoin (BTC) pars by rallying more than 20% to secure a spot as the highest daily gainer amongst the top-10 cryptos ranked by market capitalization.

Investors will recall that in 2019, Litecoin front-ran the Ether (ETH) and Bitcoin rally by pumping more than 350% from January to June. Thus, the altcoin’s most recent price action is sure to stir up some strong feelings amongst traders who may interpret the altcoin’s trend reversal as the beginnings of a wider crypto-market rally. 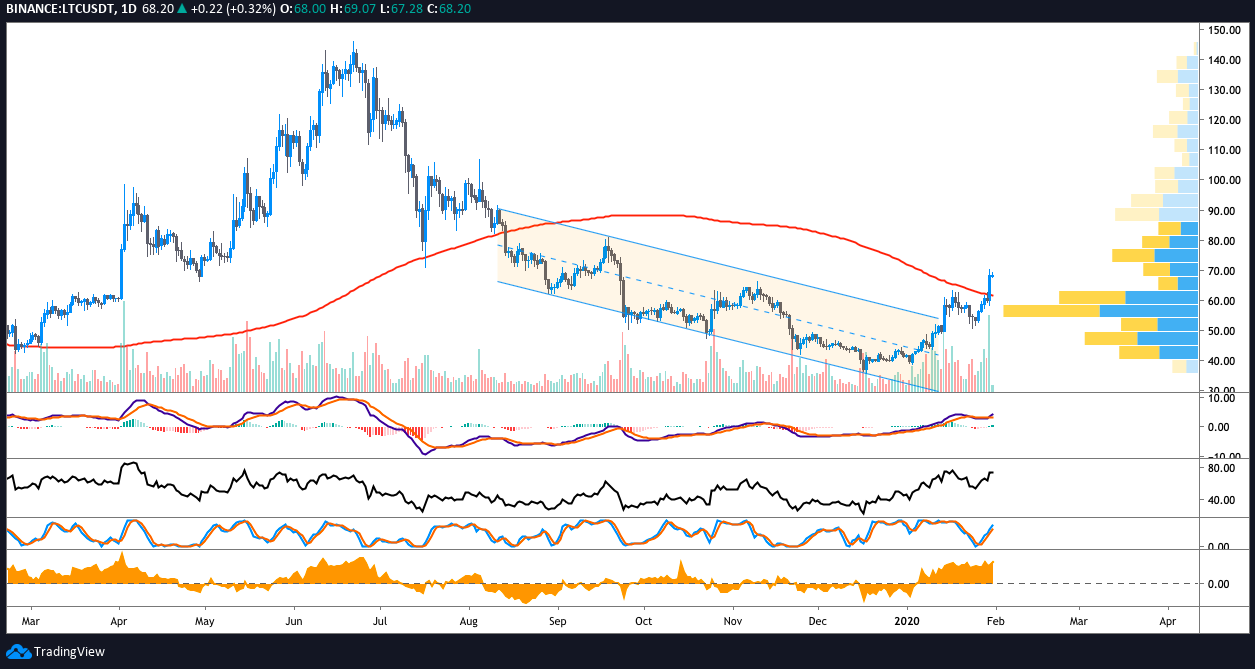 The LTC/USDT pair broke above the 200-DMA on the highest trading volume seen since April 2019 when the price moved from $59 to $99. In addition to breaking out of the descending channel, Litecoin also surged above a high volume node on the volume profile visible range at $55-$58 to set a weekly higher high at $69.89, a price not seen since September 2019.

Although the moving average convergence divergence (MACD) flipped bullish on Dec. 21, 2019, it has taken some time for Litecoin price action to heat up and the most recent bull cross on Jan. 29 preceded Thursday’s 20% rally. 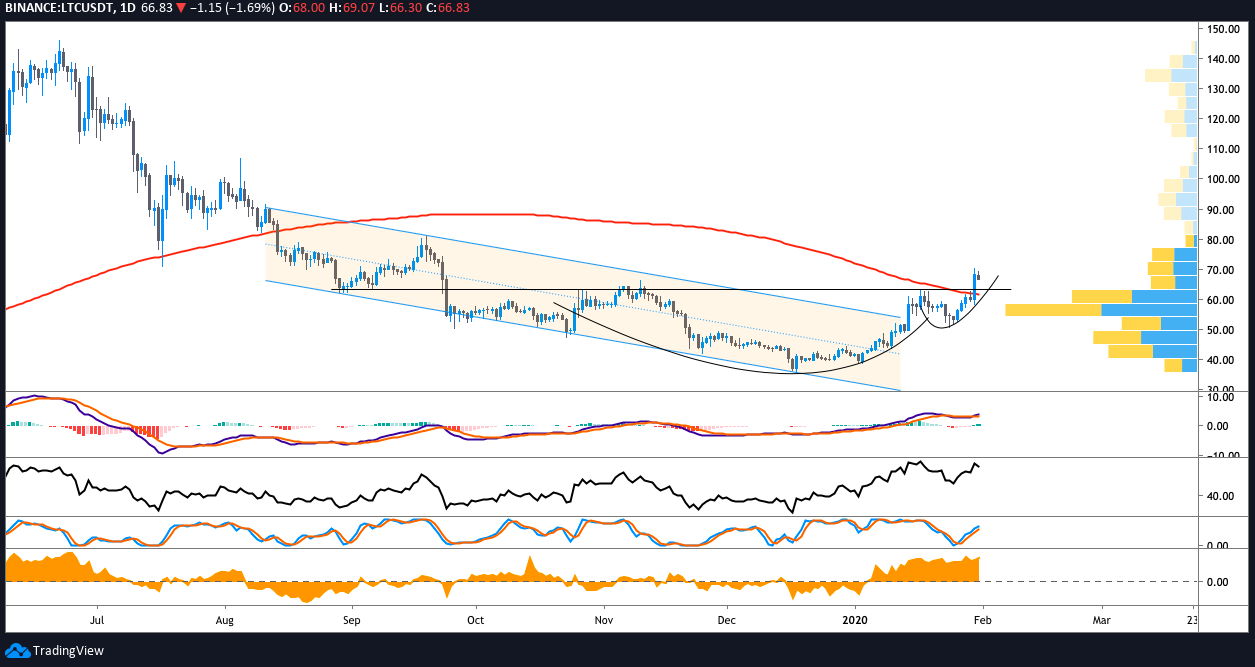 Traders will also note that Litecoin has completed a massive cup and handle pattern and broke out strongly from the handle.

Typically, the cup and handle formation serves as a springboard for the continuation of the uptrend; and the projected target of the breakout is often predicted by measuring the distance from the right side peak of the cup and the bottom of the cup.

In this case, traders that swear by the cup and handle pattern would cite a $90 to $100 target, but we all know the crypto market is driven by an incredibly complex set of ever-changing factors.

Litecoin now joins the ranks of altcoins breaking above their multi-year descending trendlines and 200-day moving average resistance zones. As for the next steps, traders will need to turn $63 and the 200-DMA to support before the price can move higher. 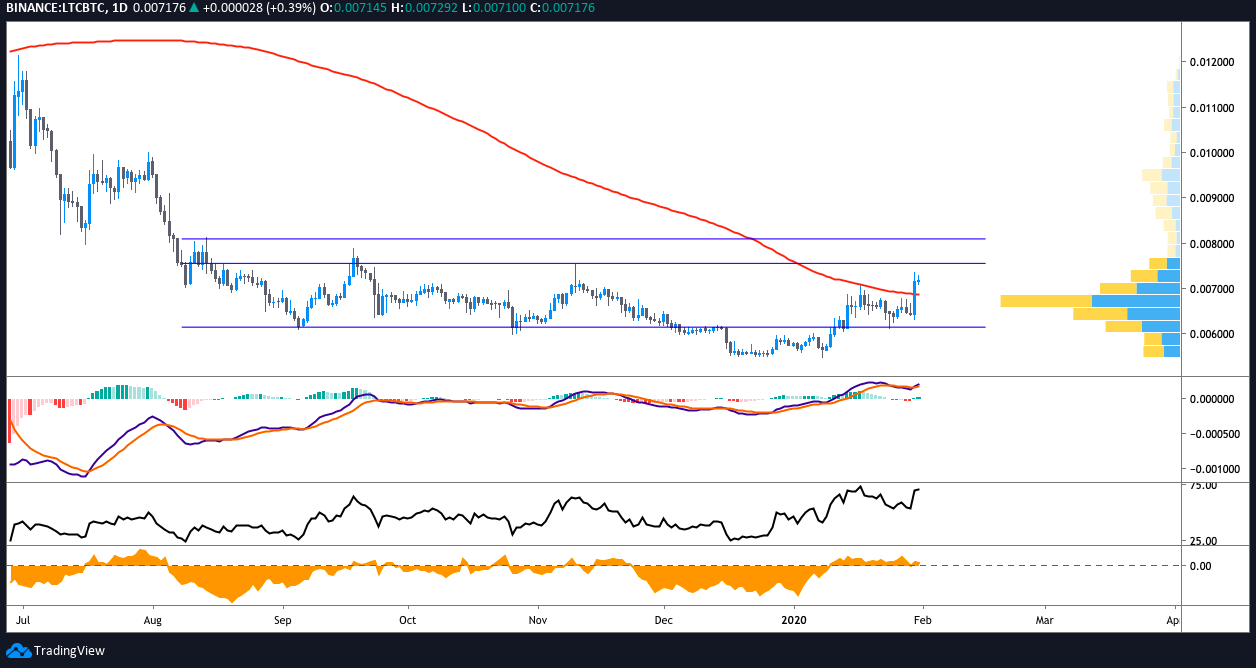 The price action on Litecoin’s Bitcoin pairing (LTC/BTC) also mirrors that of the LTC/USDT pair although the cup and handle pattern is much more shallow. The LTC/BTC pair broke above the 200-DMA and the high volume VPVR node and now approaches a long-term resistance at 0.007529 satoshis.

Similar to LTC/USDT, the MACD histogram has flipped positive and the MACD crossed sharply above the signal line. The relative strength index (RSI) is also pushing into the overbought region suggesting the price may need to pull back to support at 0.006736 (sats).

Traders playing the USDT pair and especially the BTC pair will need to keep a close eye on trading volume as today’s purchasing volume on both pairs set a nearly 7-month high.