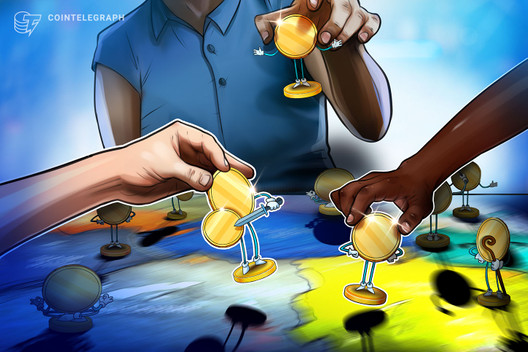 There were signs in 2019 that large institutions are moving closer to embracing cryptocurrency and blockchain technologies.

Slowly but surely, institutional players are moving into the crypto/blockchain neighborhood.

According to a 2019 Fidelity Investments survey, about 22% of institutional investors already have some exposure to digital assets, with most investments having been made within the past three years. Moreover, 4 in 10 respondents say they are open to future investments in digital assets over the next five years.

“Institutional investor involvement in cryptocurrency in 2019 has been primarily about getting the infrastructure in place, such as the opening of Fidelity Digital Assets and Bakkt,” Jonathan Levin, co-founder and chief strategy officer of Chainalysis, told Cointelegraph, adding:

“Now that the infrastructure is in place, we expect institutional volume to come as long as they can get comfortable with the compliance and market risks of cryptocurrency.”

Banks and insurance companies seem to be more engaged than other institutional segments, commented Levin, “but once institutional support from these key sectors are in place, we expect an uptake from investors such as funds and family offices.”

Clearly, there is still work to be done — particularly with regard to compliance — but with that as a preamble, here are our top 10 institutional actors in the last year:

In June, Facebook aroused the crypto — and financial — world with its announcement of a new digital currency, Libra, and the formation of a Switzerland-based, non-profit organization, the Libra Association, to manage it — with a mandate to “help reinvent money and transform the global economy.”

The permissioned blockchain-based currency was to be tethered to a basket of bank deposits and short-term government securities. The new association began with 27 corporate partners, including Mastercard, Paypal, Visa, Vodafone, eBay and Uber.

The project ran into immediate headwinds, however, especially from global regulators who feared for their own fiat currencies and the creation of a shadow banking system. Two United States senators wrote a letter to Mastercard and Visa, among others, expressing “deep concern” that the project could destabilize the global financial system — as well as facilitate criminal and terrorist financing. Apple CEO Tim Cook said companies like Facebook shouldn’t be in charge of a global currency. Partners exited, and, by late 2019, one-quarter of the original partners were gone, including Visa, Mastercard, PayPal and eBay.

Reports of Libra’s demise may be premature, though. Central bankers have been spurred to pilot their own digital currency projects in anticipation of Libra’s debut, and, in early December, the Libra Association was still projecting a 2020 stablecoin launch at least in some parts of the world, like Europe.

In February, J.P. Morgan, the largest bank in the U.S., introduced JPM Coin, claiming to be the first bank to create and test a digital coin representing fiat currency. The goal was to allow instantaneous payments between the bank’s institutional clients on a permissioned blockchain platform.

The stablecoin was to be 1:1 redeemable in a fiat currency (U.S. dollars) held by J.P. Morgan — unlike most stablecoins, like Tether (USDT) and USD Coin (USDC), that claim to have a 1:1 fiat collateral. It was slated to roll out in late 2019, but it had still not launched publicly as of Dec. 10.

J.P. Morgan has been actively exploring blockchain and crypto-related initiatives for several years — notwithstanding the fact that CEO Jamie Dimon once called digital currencies a “fraud.” Its Interbank Information Network, a bank payment and data-sharing network based on J.P. Morgan’s in-house blockchain platform Quorum, implemented in 2018, has some 365 global members today and will expand in 2020 to Japan.

The incoming chairman of U.S. Commodity Futures Trading Commission (CFTC), Heath Tarbert, said in October that Ether (ETH), as well as Bitcoin, are commodities — not securities — and, as such, will be regulated under the Commodity Exchange Act with the CFTC as its primary regulator.

“My guess is that you will see in the near future Ether-related futures contracts and other derivatives potentially traded,” stated Tarbert.

This statement provided regulatory clarity and some relief to Bitcoin and Ethereum developers and investors, present and future. If the CFTC was going to regulate BTC and Ether, then surely it wasn’t going to ban them, which is a real concern.

In his first public appearance in October, Tarbert also emphasized the importance of blockchain and digital assets. The U.S. has been falling behind in blockchain innovation, receiving little support from U.S. policymakers and regulators, according to Perianne Boring, CEO of the Chamber of Digital Commerce. However, here the chairman of the CFTC said, “I want the United States to lead because whoever leads in this technology is going to end up writing the rules of the game.” This was an “incredibly important” development, Boring told Cointelegraph.

Related: CFTC’s New Chairman: Who Is Heath Tarbert, What He Thinks of Crypto

Custody isn’t the most exciting segment of the crypto world, arguably, but it is a critical one, especially as the industry matures. It figures in many real-life investment decisions. How, for instance, will older Bitcoin holders pass on their BTC to their heirs when they die?

In 2019, Fidelity Investments, the mutual fund colossus ($7.2 trillion under administration), stepped up with a full rollout of its Fidelity Digital Assets custody unit, four years in the making, which targets institutional investors like hedge funds, family offices and market intermediaries.

The firm’s carefully charted deployment route was marked by a series of milestones: Initial research (2014), formation of a blockchain incubator and initiation of a proof-of-concept process (May 2015), acceptance of Bitcoins as charitable donations by Fidelity Charitable (November 2015), formation of academic and industry partnerships (June 2016), acceptance of Ether for charitable donations (September 2017) and Fidelity Digital Assets unit announced (October 2018).

In mid-December 2019, Fidelity Digital Assets announced that it may add support for Ether in 2020 if there is sufficient demand for it.

Related: Financial Institutions Use Stablecoins to Shake Things Up in 2020

Settling cross-border trades is often cited as a promising use case of blockchain technology, and, in 2019, a global banking consortium moved closer to putting that proposition to the test.

In June, 14 financial institutions from the U.S., Europe and Japan collectively invested $60 million in a new company, Fnality International, that will build an Ethereum blockchain, upon which trades among the banks will be settled using a token called the Utility Settlement Coin (USC) — backed with cash collateral deposited in central banks.

One key challenge facing the consortium will be interoperability, according to Olfa Ransome, Fnality’s chief commercial officer:

“Not only must interoperability be achieved between legacy and digital venues and platforms, but also between competing blockchains — to support atomic settlement regardless of the standards and protocols — and between different means of on-chain payment.”

The platform is expected to be operational by mid-2020 once regulatory approvals have been secured.

In February, Virginia’s Fairfax County’s Retirement Systems (FCRS) became the first U.S. pension fund to invest at least a portion of its retirement holdings ($21 million) in cryptocurrency assets. The allocation, through Morgan Creek Digital, was just a small portion of the system’s assets, “given that the blockchain technology industry is still in its early stages,” explained FCRS to its participants. It reportedly invested another $50 million in a second Morgan Creek Digital fund in October.

Pension funds’ conservative mandates have made them reluctant crypto investors until now; they are generally more cautious than hedge funds and university endowments.

Related: First Pension Funds Investing in Crypto — a Sign of Things to Come?

Bakkt drew many of the crypto exchange headlines in 2019, but the Chicago Mercantile Exchange (CME), the world’s largest futures market, notched the most Bitcoin futures contracts. At its height, in May 2019, CME was averaging $515 million in daily volume and more than 13,600 futures contracts each day. On May 13 alone, Bitcoin traded a record daily volume of 33,677 contracts, equivalent to over 168,000 BTC (worth $1.705 billion at the time).

CME’s activity dropped toward the end of 2019, though — from a year-to-date daily average of more than 7,000 Bitcoin futures contracts in May to less than half of that by early December.

CME continues to expand its crypto product offerings, however, announcing in November plans to introduce options on Bitcoin futures contracts by mid-January 2020. Some industry players believe the Bitcoin derivatives market will one day dwarf the BTC spot market.

Related: CME’s Futures Options Sprinted Out of the Gate but a Marathon Lies Ahead

In July, the insurance industry’s high-profile blockchain consortium, B3i Services AG, announced its first product, a catastrophe excess-of-loss reinsurance coverage. The consortium expected it to be on the market for the January 2020 renewal season.

Formerly known as the Blockchain Insurance Industry Initiative, B3i, incorporated in 2018,   employs blockchain technology to reduce friction in the transfer of risk. Each reinsurance contract in the network is written as a smart contract atop an open-source Corda blockchain platform. The smart contracts are capable of automatically validating a condition and can determine, for example, whether an asset should go to a nominee or back to the source, or a combination thereof.

B3i started with five insurance companies experimenting with Ethereum in May 2016. Today, the consortium encompasses 18 insurance companies and reinsurers from five continents — including Aegon, Allianz, Axa, Swiss Re, Liberty Mutual, Munich Re, Tokio Marine and Scor, among others.

When it was reported in April that Harvard University’s investment arm, Harvard Management Co. (assets: $38.3 billion), was making its first crypto investment, it was hailed as a win for the cryptocurrency/blockchain sector, which has struggled to attract institutional investors with deep pockets.

Admittedly, the investment in blockchain-toolmaker Blockstack tokens was worth less than $12 million, a drop in the bucket for the world’s largest university endowment, but following Yale University’s lead in 2018 — that school invested in two crypto funds, managed by Andreesen Horowitz and Paradigm, respectively — it could signal a growing trend among high profile U.S. universities. Other elite university endowments, including Stanford and MIT, have been quietly testing the crypto waters, reported Cointelegraph in May.

Related: Ivy League Universities Set to Boost the Crypto Industry With an Injection of Institutional Investment

Key obstacles remain, however, before institutions really plant their flag in crypto/blockchain territory. Chainalysis conducted a poll of financial institutions last November, in which more than half of the respondents cited compliance in one form or another as the issue preventing them from investing more in cryptocurrency. Also, 39% said they worry about the inability to control illicit activity, while nearly 18% indicated that they are unsure of their ability to comply with government regulations in the space.

With growing commitments from heavyweights, like Fidelity, JPMorgan and ICE, however, and even stirrings from endowments and pension funds, there were clear signs in 2019 that large institutions are moving closer to embracing cryptocurrency and blockchain technologies in 2020.