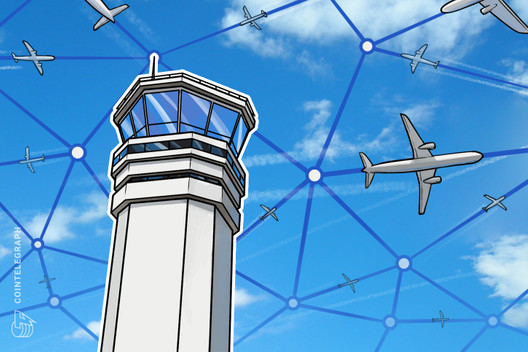 The aircraft maintenance, repair and overhaul industry — which handles a dizzying 25 billion parts a year — is turning to blockchain to tackle its difficulties.

The aircraft maintenance, repair and overhaul (MRO) industry — which handles a dizzying 25 billion parts a year — is turning to blockchain to tackle its difficulties.

Blockchain could bring up to $3.5 billion in cost savings

The idea of forming a dedicated blockchain alliance for the MRO industry was reportedly first aired in 2019, at an event hosted by major international aircraft maintenance and engineering firm Haeco Group.

Since then, international players such as Bolloré Logistics, Cathay Pacific, FLYdocs, and SITA — as well as software firm Ramco Systems, Willis Lease Finance Corporation, and law firm Clyde & Co — have all signed on to the initiative.

The report points to research by PwC  that suggests blockchain tech could save MRO businesses roughly 5% of their overall costs — equating to $3.5 billion globally — boosting revenue in the aerospace industry by up to $40 billion (4%).

Verdict reports that the alliance will look into issuing aircraft parts with digital passports: these serve to prove a part’s authenticity and provide a “digital thread” for its transport and custody history.

“In an industry as interconnected as ours, the ability to share and record common data in a secure way without giving up control of that data is fundamental to driving new efficiencies in air travel. This is particularly true for the MRO sector.”

Speaking to Cointelegraph, a representative for SITA said that the firm had identified MRO as being just one of five potential areas in aviation where blockchain could play a key role. The others included identity management, chain of custody (for luggage, cargo and aircraft), and flight operations.

As part of an Aviation Blockchain Sandbox founded in 2018, SITA has conducted two major trial projects involving Ethereum and Hyperledger. This included a “FlightChain” smart contract initiative with participation from British Airways, Heathrow, Geneva Airport and Miami International Airport. The initiative is focused on using blockchain to improve airlines’ and airports’ management of flight status data.

A blockchain alliance for each industry

Cointelegraph has reported on the proliferation of blockchain alliances across industries and sectors as diverse as gaming, finance (i.e. The Wall Street Blockchain Alliance), food safety and international trade.

In January, for example, the ICC TradeFlow Alliance — built on top of a project developed by Singapore’s government — spurred a new partnership between the city-state’s government, the International Chamber of Commerce and 16 other firms including Mastercard and Mitsubishi.

Together, they will investigate the potential of blockchain and other new technologies to facilitate faster, more efficient, secure and transparent trade transactions globally.