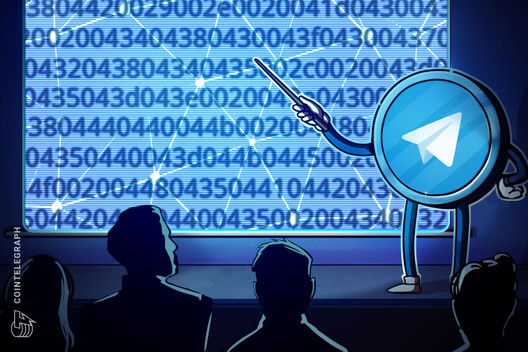 Telegram Open Network published a paper for Catchain, its proposal for a Byzantine Fault Tolerant consensus mechanism that is currently implemented in the testnet.

A Feb. 3 paper authored by Nikolai Durov, a Telegram co-founder, lays out the details of Telegram Open Network’s consensus mechanism, named Catchain. The proposed solution is a Byzantine Fault Tolerant (BFT) Proof of Stake (PoS) algorithm, similar to that used by NEO or Cosmos.

BFT algorithms are attempted solutions to solve the Byzantine Generals problem, where actors of a particular network need to maintain its functionality even if some nodes are unreliable or malicious.

Catchain will work for as long as one third of nodes are not malicious, which is equivalent to the theoretical limit outlined for BFT solutions. The system focuses on validating each block as it gets created, similar to Cosmos’ Tendermint or NEO’s dBFT. This in opposition to systems proposed by Ethereum and Cardano, where blocks are easy to produce, but must be then reconciled through fork resolution.

Each new block is created via a block generation round, during which validators have a limited time to agree. Should they fail to do so, that block is skipped.

Each validator has a clear role during a block voting procedure, with some creating the blocks, others proposing a block for voting, while the remaining nodes vote on the proposal. The roles are shifted with each new round, which should ensure the correctness of the procedure.

Telegram is set to have no more than 100 validators for the master chain and from 10–30 for each “shard chain.” According to tests conducted in 2018, a block can be generated every five seconds, undergoing the full consensus procedure each time.

For the most part, the system is reported by TON developers to be similar to Cosmos’ and Algorand’s. Differences lie in some of the specifics, such as how the nodes communicate with each other. Simply having each node communicate with every other is very inefficient, which means that each project tried to find its own way of making the process faster.

The SEC prevented TON’s launch with an emergency action filed in October 2019. The commission argues that Telegram conducted an unsanctioned sale of securities.

Other ecosystem participants argue that since the sale was restricted to only accredited investors, Telegram did nothing wrong.

The network is currently only active in testnet mode, which has not stopped some from creating blockchain explorers for it. The commission has nevertheless been very critical of its state of development, arguing that there are few current or planned uses for its GRAM tokens.