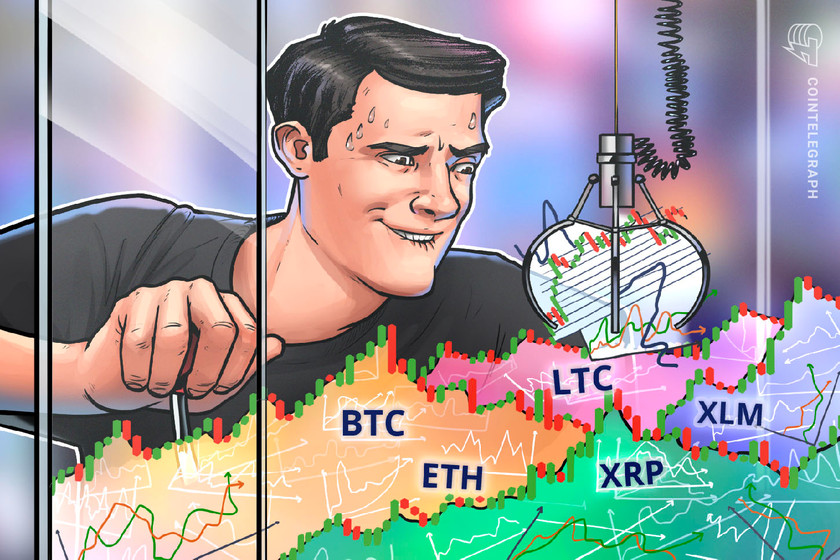 Bitcoin remains in an uptrend but is facing signs of exhaustion above $13,200, suggesting that a minor correction could drag altcoins lower.

Hot on the heels of Paypal’s crypto adoption, JPMorgan’s Global Markets Strategy division released a report detailing how Bitcoin (BTC) could offer “considerable” upside “if it competes more intensely with gold as an ‘alternative’ currency.”

According to the analysts, the three reasons for their long-term bullish view on Bitcoin are the large valuation gap between Bitcoin and gold, the growing utility of cryptocurrencies, and millennials preferring Bitcoin over gold in the long-term.

This report shows that institutions are gradually realizing the huge potential of cryptocurrencies and are willing to take a U-turn on their previous apprehensions.

Galaxy Digital CEO Mike Novogratz said that PayPal’s decision on crypto could force other big banks to consider ways to engage with digital assets. “We are going to see, over the next 10 years, a rebuilding of the financial infrastructure of this country,” Novogratz added in an interview with CNBC.

The twins believe that if big Fortune 100 or 500 companies and central banks start buying Bitcoin for their treasury reserves, Bitcoin’s price could soar.

At the moment investors are wondering if Bitcoin can build upon the current bullish momentum and continue its journey northward.

Let’s study the charts of the top-5 cryptocurrencies to find out if Bitcoin and altcoins will move higher.

Bitcoin (BTC) is in an uptrend and the price has been sustaining above the breakout level of $12,460 for the past few days. The rising 20-day exponential moving average ($11,938) and the relative strength index in the overbought zone suggest that bulls are in command.

The bulls had pushed the price above $13,214 today but they could not sustain the higher levels. This suggests that the bears have not yet thrown in the towel and are defending the $13,200 level.

However, as the trend is up, the bulls are likely to buy on dips to the breakout level of $12,460. Even if this support cracks, the bulls may again step in and buy at the 20-day EMA.

If the BTC/USD pair rebounds off either level, the bulls will once again try to push and sustain the price above $13,214. If they succeed, a rally to $14,000 could be on the cards.

This positive view will be negated if the bears sink the price below the 20-day EMA. Such a move will suggest that the current breakout was a bear trap.

The bears thwarted an attempt by the bulls to extend the uptrend today when they did not allow the bulls to sustain the price above $13,214. The sellers dragged the price down to the

immediate support at the 20-EMA on the 4-hour chart.

The bulls are currently attempting to keep the price above the 20-EMA but the bearish divergence on the RSI suggests that the momentum may be weakening.

A break below the 20-day EMA could result in a retest of $12,460, while a strong rebound off the current levels could resume the uptrend.

Ether (ETH) broke above the $308–$396 range on Oct. 22, which suggests that the bulls have overpowered the bears. Although bears have stalled the up-move at $420, they have not been able to pull the price back below $396.

This suggests that the bulls are buying on dips to $400. The upsloping 20-day EMA ($383) and the RSI above 59 also indicate that bulls have the upper hand.

This bullish view will be invalidated if the bears sink the pair back below $396 and the 20-day EMA at $383. Such a move could keep the pair range-bound for a few more days.

The pair has formed a flag pattern following the breakout above $400. The long tail on the retest of the breakout level suggests that bulls are accumulating at lower levels. A breakout above the flag will signal the possible start of a new uptrend.

Contrary to this assumption, if the bears sink the price below the flag, a drop to the $396–$400 zone is likely. If the pair once again rebounds off this support, the bulls will try to resume the uptrend. Conversely, the trend will favor the bears if the $388 support cracks.

Although XRP has not yet started an uptrend, it has formed a possible inverse head and shoulders pattern that will complete when the price breaks out and closes above the overhead resistance at $0.26.

If that happens, the XRP/USD pair could pick up momentum and rally to $0.30. A sequence of higher highs and higher lows since the Sep. 23 lows indicate a minor advantage to the bulls.

This positive view will be negated if the bears sink the price below the uptrend line. Such a move could result in a drop to $0.228409.

The failure of the pair to sustain above $0.26 could have resulted in the liquidation of long positions that pulled the price below the 20-EMA on the 4-hour chart.

Currently, the flattish 20-EMA and the RSI near the midpoint suggests a balance between supply and demand.

A breakout of $0.2635 could tilt the advantage in favor of the bulls while a break below the uptrend line may signal an upper hand to the bears.

Litecoin (LTC) completed an inverse head and shoulders pattern when it broke out and closed above the overhead resistance at $51.50 on Oct. 21. This setup has a target objective of $61.50 and if this level is crossed, the up-move may extend to $64.

The rising 20-day EMA ($51.30) and the RSI near the overbought zone suggest that bulls have the upper hand.

However, if the bears sink the LTC/USD pair below the 20-day EMA, it will suggest a lack of demand at higher levels. Therefore, it is a good strategy to wait for a rebound from a strong support before buying rather than enter on the way down.

The 20-EMA on the 4-hour chart is sloping up and the bulls have been buying the dip to this support in the past few days. This suggests that the sentiment is positive and the bulls view dips as a buying opportunity.

The RSI has been trading near the overbought zone, which also suggests that bulls are in control. A break below the 20-EMA will be the first sign that the momentum may be weakening. Such a move could result in a drop to $53 and then to $51.50.

Stellar Lumens (XLM) has repeatedly risen above the overhead resistance at $0.084584 in the past few days but the bulls have not been able to capitalize on the move and start a new uptrend. This suggests that the bears are defending this resistance.

However, the upsloping 20-day EMA ($0.080) and the RSI in the positive territory suggests that bulls have the upper hand.

Contrary to this assumption, if the pair turns down from the current levels and breaks below the 20-day EMA, it will suggest that the bulls have squandered their advantage.

The pair broke below the support line of the triangle but the bears have not been able to capitalize on this move. The bulls are currently attempting to push the price back inside the triangle.

If they succeed, the pair could rally to the resistance line of the triangle. A breakout and close above the triangle might begin a new uptrend.

Contrary to this assumption, if the bears sustain the price below the support line of the triangle, the sentiment could weaken and the pair may drop to $0.079 and lower.