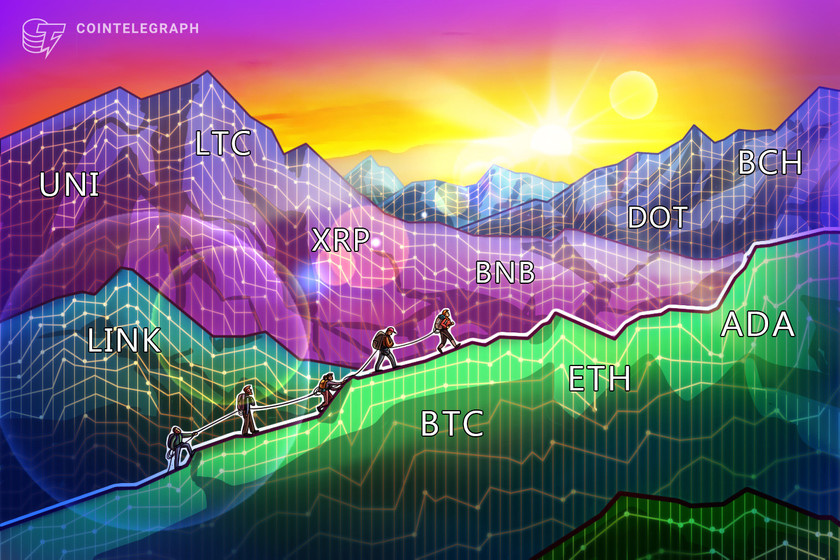 Selling pressure from global equities markets continues to weigh on Bitcoin price as traders endeavor to flip the $50,000 level back to support.

Analysts expect the U.S. economy to stage a strong recovery in the second half of this year as coronavirus vaccines are distributed and economic activity begins to increase. As growth picks up, inflation concerns are also on the rise. Speculation is rife that the U.S. Federal Reserve may have to adjust its dovish stance to hold down interest rates.

In anticipation, the 10-year U.S. Treasury yield has jumped from about 1% at the start of the year to 1.626%. This has resulted in profit-booking in assets considered as risky and as equities pullback, a temporary pause may be put on Bitcoin’s (BTC) rally.

Tesla, which had announced a $1.5 billion Bitcoin position on Feb. 8 has also seen its stock price plummet by over 34%. To stem the decline, longtime Tesla analyst Gary Black has suggested the electric car maker dump its Bitcoin holdings and instead use the proceeds for a stock buyback.

Let’s analyze the charts of the top-10 cryptocurrencies to spot the critical support levels where buyers may step in and arrest the current decline.

Bitcoin turned down from the $52,040.95 overhead resistance on March 04, which suggests that traders are lightening up their positions at higher levels. The selling has continued and the price has dipped below the 20-day exponential moving average ($48,087).

If the bears can sustain the price below the 20-day EMA, the BTC/USD pair could now drop to the critical support at $41,959.63 where buyers are likely to step in.

The flat 20-day EMA and the relative strength index (RSI) near the midpoint also suggest a few days of range-bound action.

Contrary to this assumption, if the price turns up from the current levels and rises above $52,040.95, it will open the doors for a rally to the all-time high.

Another possibility is that the pair rebounds off $1,289 and stays range-bound for a few more days. A breakout and close above $1,670 could result in a retest of the all-time high at $2,040.

The bulls are currently attempting to arrest the pullback at the 20-day EMA ($1.07). This suggests that the sentiment remains positive and the bulls are viewing the dips in Cardano (ADA) as a buying opportunity.

However, the bears are unlikely to give up easily. The negative divergence on the RSI shows that the momentum is weakening.

If the current rebound fails to sustain, the bears will once again try to sink the price below the 20-day EMA. If they manage to do that, the pair could drop to $0.80 and then to the 50-day simple moving average ($0.72).

The relief rally in Binance Coin (BNB) turned down from the overhead resistance at $265 on March 2. This suggests that traders may be using the rallies to close their long positions. The price has again dropped to the 20-day EMA ($211).

If the price rebounds off the 20-day EMA with strength, the bulls will once again try to drive the price above $265. If they manage to do that, the BNB/USD pair could start its journey to the all-time high at $348.6969.

But the 20-day EMA is gradually flattening out and the RSI continues to weaken. This points to possible range-bound action in the short term. The pair could consolidate between $189 and $265 for a few days.

A break and close below the $189 support could result in panic selling that can pull the price down to the 50-day SMA ($126).

Polkadot (DOT) turned down from $38.68 on March 3, which suggests that traders may have booked profits during the relief rally. The altcoin has dropped to the 20-day EMA ($32.49) and the buyers are now attempting to defend this support.

A strong bounce off the current levels will suggest that the sentiment remains bullish and traders are buying on dips. If the bulls can push the price above the downtrend line, the DOT/USD pair may retest the all-time high at $42.2848.

On the contrary, if the price breaks and sustains below the 20-day EMA, it will suggest that the supply has exceeded demand. In such a case, the pair may extend its decline to the 50-day SMA ($24.89).

Uniswap (UNI) is in an uptrend and the bulls have been buying the dip to the 20-day EMA ($24.05). The bulls tried to push and sustain the price above $29 on March 4 but the higher levels attracted profit-booking.

The bears will now try to pull the price down to the 20-day EMA. If the UNI/USD pair again rebounds off this support, it will suggest that traders continue to buy the dips. The bulls will then try to push and close the price above $29. If they succeed, the pair could start the next leg of the uptrend that may reach $38.

Litecoin (LTC) broke and closed above the $185.58 resistance on March 3, but the bulls could not build upon this strength as the price turned down and dipped back below the 20-day EMA ($184.43) on March 4.

However, the flat moving averages and the RSI just below the midpoint suggest a possible range formation. The pair could trade between $152 on the downside and $205 on the upside. A break above or below the range could start the next trending move.

Chainlink’s (LINK) relief rally turned down from $31.43 on March 3, which shows that traders are booking profits at higher levels. The altcoin has dipped to the 50-day SMA ($26.29) but the long tail on today’s candlestick suggests the bulls are trying to defend this support.

Buying on dips and selling rallies usually results in a range-bound action. The flat 20-day EMA and the RSI near the midpoint also suggest a balance between supply and demand. The LINK/USD pair could now consolidate between $24 and $32 for a few days.

The bounce from the uptrend line stalled at the 20-day EMA ($537) on March 3, which shows the traders are selling on rallies. Bitcoin Cash (BCH) has again dipped to the uptrend line. The repeated retest of the support at short intervals tends to weaken it.

The downsloping 20-day EMA and the RSI in the negative territory suggest that bears are in control. A break below the uptrend line could sink the BCH/USD pair to $432.02 and then to the critical support at $370.

This negative view will invalidate if the price rises from the current levels and rises above $539. Such a move will suggest aggressive buying at lower levels. The pair could then rally to $631.71.